The Life of Camp Ashraf

Mojahedin-e Khalq – Victims of Many Masters

Product Description
The fascinating story of the controversial life of Camp Ashraf in Iraq from its foundation in 1986 to the present day is told in this book. Originally created to accommodate the Iranian opposition 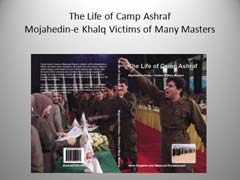 group Mojahedin-e Khalq (aka MEK, MKO, PMOI, Rajavi cult) and its leader Massoud Rajavi for coordinating the violent overthrow of the regime in Iran, Camp Ashraf became the MEK’s main military and ideological training base. The MEK later became known as Saddam’s Private Army as it became an integral element in the Iraqi dictator’s repressive apparatus.

But, even years after the fall of Saddam the MEK still has the support and backing of many in the West and is therefore able to resist opening its doors to the outside world. It is the hidden life inside Camp Ashraf which renders it so controversial. The isolated garrison became the experimental ground for Rajavi to turn his group into a dangerous, destructive mind control cult.

Rajavi keeps the rank and file in the camp in a state of modern slavery to perform acts of terrorism and to fulfill propaganda roles in Western countries for the group’s many masters.
Massoud Rajavi’s methods of enthralling his followers include banning marriage and having children, instilling irrational phobic reactions to external factors, denying any contact with the outside world through radio, television, letters or telephones. In particular members must have no contact with their families. This book exposes the hidden life of the camp and its inhabitants. It speaks for the silent victims of the Rajavi cult and for the families who wait outside the camp for news of their loved ones.

In conclusion, the book examines the ways to deal with the problem of how to dismantle a dangerous destructive mind control cult and free its members as various parties vie for control over the group for their own agendas.

INTRODUCTION
The controversial life of Camp Ashraf from its foundation to the present day makes a fascinating story in itself. The camp was created by Saddam Hussein in 1986 to accommodate the Iranian opposition group Mojahedin-e Khalq (MEK) and its leader Massoud Rajavi. Founded in 1965 the MEK first took up arms to try to oust the Shah. Two years after the 1979 Iranian revolution Rajavi tried to engineer a coup against Ayatollah Khomeini. It failed and he fled to Paris in 1981. Rajavi then tried to conduct his armed struggle against the new Islamic Republic from Paris but when this failed he was given succour in Iraq where Camp Ashraf became the MEK’s main military and ideological training base.

The close relationship between Saddam and Rajavi led to the MEK being dubbed Saddam’s Private Army; Camp Ashraf played an integral role in the survival of the Iraqi dictator after the First Gulf war when Rajavi used his forces to help crush the Kurdish and Shiite uprisings. In 2003 Camp Ashraf became an enemy target for the Multi National Forces when Operation Iraq Freedom removed Saddam Hussein from power. Then in a paradoxical move the US Government provided military protection for Camp Ashraf for eight years while its inhabitants remained on the US Terrorism List.

Camp Ashraf came under the control of the democratically elected Government of Iraq in January 2009 (under the Status of Forces Agreement). After that time it was inevitable that the camp would close. Successive Iraqi governments since 2003 insisted that the Americans close Camp Ashraf and expel the foreign terrorist group Mojahedin-e Khalq from the country because of the group’s history of terrible crimes against the people of Iraq.

In the course of twenty five years Camp Ashraf has seen many changes. But the real story of course is not about the camp but about the lives of the people who inhabited it; how they came to be there and why they must now leave.

In its forty five year history, the MEK organisation has undergone many public image changes; from guerrilla fighters, resistance army, terrorist entity to feminist democratic opposition. The man who has led the group through all these superficial incarnations is Massoud Rajavi. And behind the glamorous advertisements of a sophisticated and relentless propaganda machine, his single-minded pursuit of power at any cost and his fundamental belief in the use of violence to achieve this aim of power, has not changed one iota in all this time.

Rajavi was a charismatic speaker and skilled psychological manipulator. He discovered in himself a talent for totalitarian control which matched his narcissistic ambition for power. Although he began to convert the Mojahedin-e Khalq organisation into a cult while still in Paris, it was the acquisition of the isolated, closed world of Camp Ashraf which provided the perfect crucible to extend his experiment. In Camp Ashraf he has forced the MEK members along a most extraordinary route of mental and physical anguish to meet his needs.

Over the years former members who escaped from Camp Ashraf have told their stories to a world unwilling or unable to listen. Thousands of them consistently and courageously described the conditions of the internal revolutions and Rajavi’s bizarre requirements for members to divorce and to remove all the children from the camp; to undergo the daily humiliations of public self-confessions which enforce the celibacy and gender apartheid; to suffer micro-management of their every waking moment which imposed deliberately exhausting work schedules and disorienting indoctrination sessions; to be deprived of any information from and contact with the outside world and their families. Rajavi did all this to keep his members from leaving. When this failed, he imprisoned them.

Camp Ashraf is now a double prison for the residents. They are trapped by Rajavi’s psychological manipulations which engender paralysing fear in everyone behind the barbed wire fences which he has had erected to keep them physically inside. But they are trapped ultimately by the misguided ignorance and misplaced sympathy of all those external agencies which could take action to free them but don’t.

The life of Camp Ashraf has reached a critical juncture. It must close. The residents must leave. But over and above Massoud Rajavi’s refusal to leave, there are a host of third parties with their own agendas which militate against closure. The main players are the Americans and the Iranians who have developed their own narratives and myths around the MEK in order to use it as a tool to aggravate and intensify their thirty year enmity. Between the ‘bomb Iran, regime change’ pundits in America and the ‘crackdown on foreign backed violent opposition’ proponents in Iran, all the bases are covered.

It is these voices which dominate political debates and media reporting on Camp Ashraf. But the political and security issues are a decoy to avoid answering the fundamental question. After twenty five years of testimony describing severe human rights abuses why do the individual residents of Camp Ashraf still have no voice? Why do people continue to escape the camp even in spite of the severe restrictions? At the time of Saddam Hussein perhaps these questions could be ignored. But now?

The original inspiration to write the story of Camp Ashraf came from witnessing the determination of the families of the camp’s residents to rescue their loved ones. Since 2003 they braved bombs and bullets to reach the gate of Camp Ashraf in the hope of finding their relatives. They refused to give up, refused to take no for an answer. Even when the MEK began to pelt missiles at them they refused to give up. Their extraordinary love and courage needs to be voiced and this voice needs to reach above the cacophony of the false hand wringing and political wailing to those who are in a position to help.

But as the story unfolded it became obvious that the really voiceless victims of Camp Ashraf are its residents. As the stories of individual members emerged it was clear that many had died and many more had suffered before their information could reach the public domain. Currently around 3500 people continue trapped and held hostage to the callous whims of the various pitiless powerful political forces who do not care about their individual fates. This book must speak out on their behalf.

This book therefore is an attempt to tell their story in the hope that this will halt the diversion of this issue to everything else except this fundamental question – why are people risking everything to run away from Camp Ashraf and the MEK and why is no one listening to them?