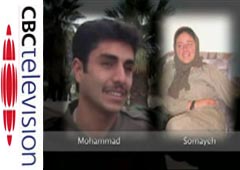 Breaking The Ties that bind

A tale of a family torn apart by lies, deception, and government bureaucracy, “Breaking the Ties That Bind” is a true story of the Mohammady family and their tangled history with the Iranian resistance force known as the Mujahedin-e Khalq (MEK).

Somayeh was only 17 when she met the recruiters of the Iranian opposition group Mojahedin-e Khalagh (MEK) in Toronto. Born into a family with sympathies towards the group and having already lost her favorite aunt in guerrilla fights against Islamic Republic of Iran, Somayeh decided to drop out of her grade 10 high school class at Etobicoke Collegiate Institute and attend a MEK camp in Iraq for a month. Most of all, she was thankful to MEK for offering to pay for her expanses to visit her aunt’s grave. On February, 1998 Somayeh left Toronto to spend a month in what later on turned to be a guerrilla compound called Camp Ashraf, the headquarters of the Organization of the Freedom Fighters of the Iranian People. Somayeh is a now a 25 year old, still living under harsh conditions of Ashraf, despite her parents restless tries to bring her back home. Somayeh is one of the many Canadian and American teenagers who were deceitfully recruited by MEK and send to Camp Ashraf, where they were trained for guerilla fights and forced to stay inevitably. In an independent letter sent to the Canadian embassy in Jordan, Somayeh asks for the Canadian government’s help to get her back to Toronto. Later however, she was forced by MEK in a court hearing to denounce her family and state that she wants to stay with MEK “holy worriers’, now a banned terrorist organization under Canadian law since 2005.

Somayeh’s life has been in great danger in the past 10 years and she is defiantly threatened to comply with MEK’ rules. Her story is very damaging to MEK and as a result the organization does not allow Somayeh to leave camp Ashraf in order to contact or meet with the Canadian Officials in private or in a 3rd party country. This has further complicated her case, as she officially told an immigration judge over satellite phone that she does not wish to return to Canada. Her family and friends know this to be a testimony made under pressure and therefore devoid of any truth. Somayeh is kept like a hostage at Camp Ashraf and must be treated like one.

Family and Friends of Somayeh Mohammadi  :

We are Family and Friends of Somayeh Mohammadi who are deeply concerned about her safety as she has been forcefully kept by Mojahedin-e Khalagh (MEK), Iranian guerrilla fighters in Iraq, for the past ten years. Somayeh is one of the many Canadian and American youth who were recruited to monthly camps when they were teenagers, only to be kept like hostages at the headquarters of the Organization of the Freedom Fighters of the Iranian People, Camp Ashraf, Iraq. This website is to raise awareness about Somayeh’s case and help us organize our campaign to save Somayeh.