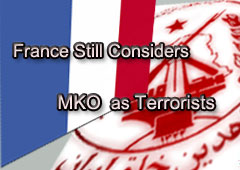 In a Daily briefing of the Spokesman for the Ministry of Foreign and European Affairs on Thursday, 30 July the deputy spokesman of the Ministry has made statements and answered some questions among which was a question on MKO :

Q: What is your position on the Mujahedin of the people living in Iraq? Is it possible to host in France?

A: It is legitimate that the Iraqi government wants to exercise its sovereignty throughout its territory. For example, the Ashraf camp, occupied by members of PMOI, whose status is the responsibility of the Iraqi authorities.

Regarding your second question, you know our position on the People’s Mojahedin Organization of Iran (PMOI), which we consider as a terrorist organization. This position has not changed after the [Mujahedin] organization’s removal from the European terrorist list, the decision, against which we filed an appeal, was based on procedural matters.