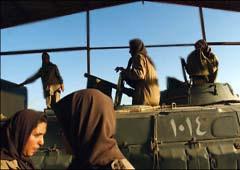 To Defenseless women of Ashraf

Woman has always been a new good without expire date in the Rajavi’s Cult. She has always been a useful and substantial thing which is the cause to achieve many other goals. A day they are soldiers to fight Iran, the other day they are rapped as a sex machine and the next day they have to obey Masud’s order just like a robot to separate themselves from their husbands and children. A day they have to burn themselves due to the arrest of their self- assigned leader and the other day they must be the commandant of a dozen of

men to make NLA the most especial army in the whole world. They don’t enjoy the least rights of a free life, the right of living in a family, having husband and children. They have to kill their maternal love because Masud can’t see them defect the cult. The women of Ashraf are very different from all the other women of the world. Slavery, exploitation, abuse, human right violence, deceit, disappointment and fear of facing facts have made them too nervous and weak to soothe their pains. The demonstrations and gatherings of 20-30 people to support the women of Ashraf and enthusiastic speeches of Maryam Rajavi are no more useful to mollify their grieves. They have no sympathy for the nonsense and insults against opponents on Rajavi’s websites since after a long time living in lonesome they don’t know how to become happy any more.

Years ago, when Maryam Rajavi on women’s Day addressed her group ‘s women she said:” let me congratulate Iranian women and promise you that tomorrow, when the steps of NLI fighters reach the soil of our country the vanguards of their liberation Army will be liberal women who will bring you and your children the flower of freedom, salvation, blossoming, freshness, fortune, hope and smile. Now the bright perspective of salvation and the big responsibility to carry it out is in front of us. The results the women of the Resistance gained show that the difficult part of the way has been passed. “

As a matter of fact what would the woman of Ashraf offer the Iranians, especially Iranian women, the day after the fall of Islamic Regime? They were supposed to give Iranians the flower of freedom and the difficult part of the way had been passed! Poor Ashraf women didn’t know that one day they have to read the secrets of their being seriously abused in European newspapers and stay silent. They were supposed to be the vanguards of freedom but they became the sex machine for Ashraf leaders. What a bad world!

The women of Ashraf have always brought a lot of advantageous for Masud and his flatterer servants. In the Cult of Rajavi the women were the main agents to operate terror operations including the assassination of the Christian priests or bombing in the holly shrines. Such decisions are made to get rid of the doubt and hesitations that are around the abilities of women. In fact it means the instrumental use of women. Farahnaz Emami, Batoul Vaferi and Maryam Shahbazpour are the victims of this Rajavi’s thesis. The women naturally submit themselves more easily than the men in order to get praised or to show their loyalty to Masud and Maryam.

A lot of defectors of Rajavi’s cult have repeatedly noted the human right abuses against women in cult witnessing that in the best condition, the women have been a pretext for Masud’s political and international prestige. The forced divorces, separating children from parents and even separating women from each other, choosing women as assistants and commandants have not been for women’s respect or honor but to satisfy Rajavi’s ambitions and his fear from his male ranks.

Thus he can prevent the risk of plot for his dumb power and also he can have the perfect abeyance of women since they are less ambitious than men and Rajavi has realized it very well.

In the hellish organization of Rajavi, forced divorces and the destruction of the base of family were the means to remove the hope for life and future so as the women, without their husbands, find Rajavi and his cult as their only safe heaven. In Rajavi’s castle, the forced marriages were just to satisfy sexual desire not to create love and emotions. In Camp Ashraf everybody knew that some women called “good looking tomatoes” they came from Ashraf dormitory. The main condition to marry a “tomato” was assigned by Rajavi; age: not more than 32 and rank: not less than “a battalion commander“. Most of the commandants who had lost their wives in the operations, married young girls (under the order of Rajavi). Some of these men were twice as old as the girls. There were a lot of these examples. Most women who were settled in Camp Ashraf had lost their husbands in Iran or in Saddam and Rajavi’s operations. There were also a group of girls who were trapped from the refugee camps of other countries and came to Ashraf, so they had no need to get a raise and they were forced to get married immediately after they arrived in Iraq. There were some pretexts for the forced marriages such as people’s best interests and perfection and “Ideological Revolution”. In order to make these women obey the forced marriages, there were some other loyal women who held some forced justification meetings to convince them to get married. Most of the girls and women were crying while marriage ceremony. During 1985 to 1988 these forced marriages were called “perfection “ noting that a woman is a “ half” and not “ perfect” this stage lasted until 1988 when the ruling “ forced divorces “ was issued and their theory changed. There was nothing about “Perfection” and “Evolution”. The women (Rajavi’s toy) had to admit forced divorces. This was Rajavi’s reasoning:” give your wife to me, I will give you the Phoenix!” His religious reason for forced divorces was that any woman, who marries the leader, would achieve high ranks in both personality and organizational hierarchy. Among the couples who didn’t abbey the [forced divorces] order some could hardly leave the organization together. The organization would keep one of them in Iraq and force him or her to write insults against his or her spouse. Rajavi held the divorce meetings on Fridays so as the former spouses couldn’t discuss the meeting case the following day since it was Saturday [the first day of the week in Islamic culture that is a workday.]

During those days the women who wanted to leave Ashraf were mentally abused; they were told that if they leaved the camp the Iraqi soldiers would rape them and take them to Abu Ghoraib. After years, when the Americans came to Iraq they said the same words about American soldiers.

If a man (even a high –ranking member) wants to leave the cult, they incite a woman to confess to having sexual relationship with him, so that they can recall him as a perverted man who was hired by the cult because of moral problems. Then the man would be convinced that he would not denounce the cult after the defection. There are similar cases about woman too. The woman who confessed to having sexual relationship with the defector would be given promotions to represent a good example for other women but of course if someday the same woman would be willing to leave the cult they would use her confessions to denounce her as a prostitute in order to destroy her personality. These corruptions are besides to some other corruptions among high ranking members who had sexual scandals. Of course they have never let the new comers know any thing about these cases because they don’t want to break down the safe heaven they described for them. The whole human and civil right abuses committed by cult leaders have had bad feed-backs including serious mental problems among members or bad sexual habits which have several times ended to terrible scandals and serious punishments.

Yes, in the cult of Rajavi women are rapped, abused, their personality and individuality is stolen. They are busy with their dumb positions and in case of need they are still used and abused. However, Rajavi allegedly wants to solve sexual contradictions, in fact he brings about the biggest corruption in the group.

The writings in a Swedish newspaper on the terrible corruption and abuse of women soldiers in NLA irritated the criminal leaders of the cult because they have always tried to hide the perfect devotion and obedience of their members who easily and without any opposition devote their lives in self-immolation operations, or carry out bombing or grenade operations and in case of the risk of arrest, they would easily kill themselves with a cyanide capsule, not thinking that they are killing innocent people. This way they can also get the title of a “martyr”.

Today the women of Ashraf have nothing to be proud of or look for their future in. There are no more weapons to be used by Maryam and Masud to deceive Ashraf women calling them the proclaimers of the freedom of Iran. There are no more spouses or children to worry about their future. So the hope for future is meaningless. When a woman is deprived of her basic rights such as having husband or children and the love is buried in her heart, isn’t it funny to promise her the freedom of Iranian women? Can this oppressed woman prove herself and set off to struggle for Iran? How can this demolished individuality get rid of too much humiliation and exploitation? The denunciation made by a Swedish newspaper, after so many years showed only a small part of the grieves of Ashraf women and this small part didn’t please the cult leaders who think that no body realizes their crime. How can they defend the woman of Ashraf after such a scandal? However the disgraces are bringing about one by one and taking the cult of Rajavi to annihilation.