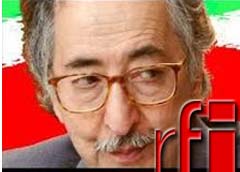 The US prominent politicians attended the conference held by MKO last night to speak on behalf of the group under the title “Ashraf and Policy on Iran.”

Former NY mayor Giuliani spoke of necessary change in US policy towards IR:”Appeasement of dictators leads to war, destruction and the loss of human lives,” Giuliani said. “For your organization to be described as a terrorist organization is just really a disgrace.”

Mr. Banisadr, how do you evaluate such a behavior by some prominent republicans if we don’t consider it a shift in policies?
Dr. Abolhassan Banisadr:

Well, regarding Mr. Rajavi, it is a 180 degree change. MKO started its activities by assassination of Americans in Iran. Now the organization is doing something that’s never been recorded in our history. They pay western politicians to travel and to participate in their gatherings to gain their support.

Imagine the Iranian community seeing the group directly and clearly backed by people like Mr. Mukasey who was secretary of DOJ while Iran Gate scandal or John Bolton, a neo-con who attended another MKO conference to support the group. They are told by these prominent people,”Remove the current regime and replace it by this obviously dependent group[MKO]!” I’m not surprised if the above- mentioned American figures do not know Iranian people and are not aware of the situation in Iran. This means that such behaviors by these people just stabilize the Iranian regime but not weaken it. Fighting against dictatorship is not feasible by publicly supporting groups like Mr. Rajavi’s group.

That was about the Iranian side. And about the American side, as I told in US Republican Party there are different affinities. Those who were in Bush administration are not simple. They are a bunch of warmongers who moved ahead the wars in Iraq and Afghanistan and caused the current situation in Iran. As it was investigated those wars were launched for gas and oil. Gas and oil of middle Asia in Afghanistan war, the oil of Iraq and the Gulf; total control over the gulf. They are such type of people!

They are not naïve people to come here just to support Rajavi’s group. They know well that the group has no base in Iran and Iranians hate them. I don’t think they are not aware but they are not able to do anything else.

Those elements who advocate freedom and independence do not resort to foreign powers and they have always made all their efforts to prevent foreigners from making alternative for Iranian regime and they will never let them make it. That’s the task of Iranian people. The independent alternative exists and we are sure that Iranian’s movement will win.
RFI: So, Mr. Banisadr, don’t you think that republicans could make a change in current US policy?

Dr.Banisadr: I don’t think there is a change at all. Think of when they invaded Iraq where Mr. Rajavi was harbored by Saddam. If they had been trustworthy about their claims for war on terror ,they should have removed the group’s base Camp Ashraf from Iraq immediately after their arrival since they considered MKO as a terrorist group, but they didn’t do so, instead they protected the group. Mr. Bush’s gone, Mr. Obama has come and the US policy is still based on protecting the group. We would speak of change in policy if they eradicated MKO from Iraqi territory.

A number of people suggest that MKO expulsion is wrong! They want to organize the group against Iranian regime! I mean they want to use MKO as a tool against Islamic Republic!

RFI: Do you think Obama administration will accept to use MKO in its policies towards Iran?

Dr. Banisadr: well, if you refer to Wikileaks reports, they say they will do so! However, we haven’t seen such report about MKO yet but there are reports on such use of other ethic minorities by US. They are using them now! So it is not unlikely that this administration [Barack Obama] seeks to use the group but those who run US foreign policy seem to know that using this group against Iranian regime is more harmful than beneficial because it will multiply public hatred among Iranian community!

RFI: Mr. Banisadr I’m very thankful to you for your presence in this show. I notify that Mr. Abolhassan Banisadr was the first President of Islamic Republic who resides in France now.
Translated by Nejat Society