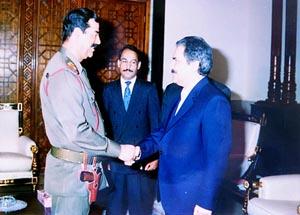 being who sells himself to the devil in exchange for what is believed to be an acceptable price to get to immortality, but in the end he comes to the bitter fact that entering a deal with the devil can end in nothing but the eternal misery.

This is exactly the conclusion the «MKO» terrorist group has come to ultimately after selling themselves and their country to a devil named Saddam Hussein.

Designating the group as an international terrorist organization is the only thing that both Iran and America agreed on, even before the emergence of al Qaeda up to now. So what is the problem with this group?

First of all, and in order to tell the story in a sequence of facts I should indicate that this organization, which the Iraqi government’s stance against it in order to expel it out of the territory of Iraq is argued and criticized by some, is a terrorist organization, in the meaning of each word.

MKO practiced terrorism against the West and America in particular, through assassinations and bombings against Western interests in the sixties and seventies (for which it’s been now for a long time in the West’s list of designated terrorist organizations). Also it has masterminded a slew of assassinations and bombings against the Iranians since the Islamic Republic was established until recently, perhaps the most notorious of which are their bombing of headquarters of the Republican Party and the bombing of Iran’s parliament in the early eighties, which resulted in the death of dozens of senior Iranian officials, including, former Iranian President Rajaei and prime minister Bahonar and former Iranian judiciary chief Ayatollah Dr. Beheshti.

After relocating to Iraq and under the direct protection of Saddam MKO also committed numerous crimes against Iraqi people. With the help from the Iraqi dictator they gained such a power and authority in Iraq which no one could even dream about it, even members of the Iraqi intelligence service and security forces.

The elements of this organization had near-absolute powers in safeguarding and investigation. They were present in every street, especially in the vicinity of the headquarters of the government and the presidential palaces and homes of officials and ministers, and the Iraqi people merely watched the heavily armed to teeth MKO members and their armored cars. It was as a result of this miserable situation that dozens of Iraqis were killed or arrested, either intentionally or inadvertently, on mere suspicion of not to stop at night.

Today the presence of this military-trained and armed to the teeth organization in the Ashraf camp (camp, not the city) and the rest of the camps set up for them by Saddam is not only contrary to Iraqi sovereignty, but it is ultimately for the inspiration of other terrorist organizations throughout the world and a letter to them saying that you can commit any crime and spill any blood and in the end sell yourself to the devil (every devil, either small or big) and save your life.

And those who shed tears for such a terrorist group which is rejected by the whole world must be aware that terrorists who have sold their souls to the devil would be prepared to do anything to complete the transaction even if they need to backstab their hosts.

I think it is our duty, as Arabs, to stand by the Iraqis in their just position in order to expel these foreign fighters from their own land.
However for those who are not still convinced, the alternative solution is that they «host» MKO in their own countries away from Iraq. They are nothing more than 3500 individuals and just a few Tanks.
Al-Qabas, Kuwait, May 2009
http://www.alqabas.com.kw/

Iranian opposition group Mojahedin-e Khalq had close ties with former regime’s security and military services because they had common goals, and therefore it was strongly involved in suppressing the uprising of people after 1991 invasion to Kuwait.

Following the ouster of Saddam regime, the elements of this group were protected by US soldiers; American’s put the MKO members in one of its camps in Diala province.

MKO was involved, along with the forces of former regime, in forcing the families in Diala to leave their homes. Coalition forces have not paid enough attention to the issue.

What seems to be important in the fate of this group, which has been listed as terrorist, is that it would on the agenda in the upcoming Iran-US talks.

Reliable intelligence received by Alqabas newspaper indicate that Iran would set forth particular issues like the presence of the group in Iraq and the necessity of cracking on it in the framework of a MOU that will be signed in Iraq.

This newspaper’s intelligence also show that the Iranian foreign minister, Manouchehr Mottaki, who had taken part in Sharm El-Sheikh conference, said Iran-US meeting depended on written request from Washington and the Iranian supreme leader Seyed ali Khamenei said in his speech a few days ago that such request had been delivered to Tehran. Therefore, we can conclude that Iranians will join the talks with US and that the US is ready to discuss the fate of MKO.

On the other hand, this organization has had security consequences for Iraqis and since it’s being protected by Americans, Iraqi government is not able to make final decision about the group, therefore they (Iraqis) would be satisfied to see the results of US-Iran decisions.

In response to Turkey’s positive stance, Jafari’s government should cooperate with it in resolving the issue of Kurdistan.

The outcome of the meeting of Iraqi neighbors’ interior ministers in Istanbul was in favor of Iraqi government and was conducted for fighting terrorism and preventing terrorist elements from penetrating the region. What can be viewed easily in the meeting was the clarity of the decisions. Turkey’s positive position attracted the attention of all attendants. Turkey’s interior minister called the survivors of the former regime, and their associates and affiliates, terrorist and stressed that they think of nothing except instability and blood shedding in Iraq.

This positive stance was also reflected in the final statement of the conference. Iraqi neighbors announced their preparedness to help Iraq fight terrorism by giving training services and security equipments.

In response to this positive stance, Turkey should cooperate with Iraq in eradicating PKK in Iraq. This armed group has established military bases in northern Iraq and enjoys the assistance of different groups.

If Iraq wants its neighbors to tighten up security at their borders with Iraq and stop the terrorists entering that country, it should work to guarantee the security of the neighbors. Sheltering terrorists in Iraq should not be justified using ideological reasoning by Jafari’s government. As Iraq neighbors try to secure the region, Iraq should also play its role. In this regard, Iraq should stop PKK’s activities in the north.

Armed groups such as PKK, Ansar Al-Islam, Al-Qaeda and Mojahedin-e khalq and have chosen Iraq as a terrorist land for themselves and use religious, Islamic and Jihadi slogans to hide their own terrorism, violence, kidnapping, trafficking drugs and weapons and humans in the region. All these groups, despite the difference in ideology and resources, have one purpose and that is "close cooperation". The reason for this is the close cooperation of Baath party with Al-Qaeda and Al-Zarqawi. Riot and murder in Iraq is the result of the cooperation of these groups.

Keeping these terrorist groups, and justifying their presence for security and religious reasons, doesn’t benefit Iraq.