PMOI-NCRI: The Siamese twins of terror!

Terrorists and assassins of all ideological bases often use the same method when they understand that the violent side of their actions can serve their policy and to miss their objectives: they create a political wing.

ETA Basque party Herri Batasuna, the IRA was Sinn Fein, the Corsican FLNC took A Cuncolta Naziunalista, the CCC had the Belgian collective Red Line, etc …
Officially, there are  independent terrorist groups and parties, but in reality the funding, objectives and even some leaders have in common. We think the No. 2 Sinn Fein it was known he was at one time the military leader of the IRA.
Despite these links, and connivance, it is rare that a terrorist group and its political wing are as mixed as are the People’s Mojahedin of Iran (known in French OMPI) and the National Council of Resistance of Iran (the NCRI in French CNRI ). So much so that in this case, one can hardly speak of a single organization that changes its name in public or objectives of the moment.
We invite you to this radioscopy two Siamese twins of terror: PMOI / NCRI.

The NCRI: an empty shell
At its inception in 1981, the National Council of Resistance of Iran (NCRI) includes around PMOI, its main component, other movements of the Iranian opposition, such as the Kurdish Democratic Party of Iran (KDPI) , the independence movement led by Ghasem Loo, the National Democratic Front (NDF), the Hoviyat (a branch of the Fedayeen), the Union of Communists of Iran (UCI), the Workers’ Party (PT), the Union for liberation of workers (ULT), the Council of the unified left for Democracy and Independence (CGUDI) and other leftist groups.
Mujahidin however refuse the support of other opposition movements, such as the Liberation Movement of Iran (MLI) or the Freedom Party (PL), Mehdi Bazargan, the first president of the Islamic Republic of Iran and former right arm of Khomeini, the People’s Fedayeen, the Tudeh Party (Iranian Communist Party or) and the Monarchists, especially the Iranian constitutionalists (IC) and the Organization of the flag of freedom of Iran (ODLI). As for the National Front Nationalist Party of former Prime Minister Mohammed Mossadegh, which rejects the very concept of Islamic government, he himself refused to join this forum.

Political coalition of democratic forces in Iran, which according to the so called parliament in exile, NCRI is supposed to act as a provisional government after the overthrow of the current Iranian government. Soon, its members drawn from the ranks of the Mujahidin stumble against the authoritarian style of Massoud Rajavi, whose unilateral decision to link the Council on Iraq raises a public outcry. This alliance, which is regarded by some as an act of treason, has been formally negotiated by the head of the Mujahidin Iraqi Foreign Minister Tariq Aziz during a meeting in January 1983 in France. Abolhassan Bani Sadr, the most important member of NCRI, protested against this alliance . Two groups coexisted in the NCRI. The first called for the overthrow of the Islamic regime by all means, even if it means accepting help from abroad. While seeking the same goal, the second was opposed, in principle, to any foreign aid. PMOI was one of the first and will run in collaboration with Saddam Hussein during the war between Iran and Iraq.
The NCRI began a slow process of disintegration. To protest against the dictatorial methods of Massoud Rajavi (leader of PMOI), most groups that make up their deck one after another. The leader of Mujahidin which tries to control of that body, opposes any form of democratic debate within it. Mujahidin determined who could join them, which deserved the right to vote. Critics have rejected the National Council or silenced.

The Kurdish Democratic Party of Iran (KDPI), which officially left NCRI in 1986, explained the reasons for its departure, eight years later, in these terms:”We consider the Mujahidin, in the light of our own experience with them between 1981 and 1986, and their attitude vis-à-vis other formations of the Iranian democratic opposition, as a sectarian and undemocratic. We can not, therefore, trust their loyalty to the democratic aspirations of the Iranian people.”

Asked about the reasons for his departure from NCRI,  Baba Khan Tehrani, a militant left-wing former member of the Confederation of Iranian Students (CIS), who currently lives in Hamburg, Germany, said:”The Mujahidin have not played the federating and unifying role that was supposed to be theirs. They have always sought, instead, to impose their domination and were not embarrassed to drive a wedge among the other forces of the Iranian opposition.”
Become an empty shell, the NCRI is now composed of hundreds of members (between 200 and 300 according to versions), most of the leaders of the PMOI, entirely controlled by Rajavi. Associated groups, which bear different names (Muslim Students Association, Association of Teachers and professionals Iranian .Association of Iranian women, etc..), There are only dummy. They are supposed to give the appearance of NCRI a forum bringing together”all political forces fighting the religious, dictatorship in Iran and who represent various social strata of the Iranian people,”according to the phraseology of the movement.

In this council, where individual members have voting rights equal to those groups, the membership criteria are not clearly defined. In fact, the PMOI membership that decides what he wants, which empty the instance of any legitimacy and credibility and is an additional instrument of control in the hands of a small sectarian group.

Frameworks
There are more than 110 NCRI executives  also have functions within PMOI. The self-proclaimed president and official spokesman is no one other than Massoud Rajavi, grand guru of PMOI. Besides the best known figure of NCRI, is no one other than his wife Maryan Rajavi, designated (by a vote of who, for what it promises to give more freedom to Iranians …) as the future president of Iran. As a token of independence of NCRI compared to PMOI, it is bad strikeout.

In addition to the cut”divine”of Rajavi, here are 3 examples among hundreds of others that demonstrate not only the connections between PMOI and the NCRI but also prove that the NCRI has called political wing but is is a gathering of terrorists having learned just temporarily, to put a costume tie.

– Member of PMOI since 1969. Responsible in 1979 of refueling para-military units of PMOI. In 1987, he became chief of the National Liberation Army (NLA), which was composed of members of PMOI and to serve as a supplementary force to the troops of Saddam Hussein in the war against Iran. It is wanted by Interpol for murder. He is responsible for the study of strategy and defense of NCRI

– Militants in the first hours of PMOI. In 1982, she became a member of the state major terrorist operations in urban areas, responsible for numerous attacks in Iran. She was later responsible for the logistics of training camps in Iraq PMOI in 1988 and became a member Executive Committee of PMOI and eventually lead the Ashraf camp in Iraq that was the main camp of PMOI. It will eventually be the second in command of the NLA and is as such a responsibility in the massacre of Kurds who rebelled against Saddam in 1991. It is also sought by Interpol. The Democrat in the soul of NCRI is a member since 1992 and was responsible for the Committee for Research and Education.

Mahmoud Azedanlou
– Began its activities in PMOI before the Iranian Revolution. After the failure of a coup against Khomeini, he is one of the most ardent advocates of armed struggle. He became in 1985, central committee member of PMOI and come finally to the leadership of the Movement. It will also have responsibilities within the NLA and, as such, is wanted by Interpol for murder. He was in charge of the NCRI to economic issues.

In event
In essence, the”Siamese twins”terrorists do not hide their proximity. Thus on these exclusive pictures of a demonstration which took place in Brussels in November 2005 and where we see distinctly the flags of NCRI and PMOI coast to coast. Note that there is no other flag Iranian opposition organization.

Conclusion
PMOI / NCRI have the same leaders, the same framework, the same structure, the same practices and sectarian violence. The uniform and the Islamic veil, the insignia of paramilitary type, this shows that PMOI is the NCRI and that, whatever the name used, they are of a single sectarian and terrorist organization: the Mujahideen of the People.
The whole is that the EU does not fall into the trap of these Siamese of terror and continue to regard them as a single criminal group.
Posted by geostratos in French

PMOI crows … but probably not for long!

The People’s Mujahideen of Iran (PMOI alias, aka MKO, alias or NRCI) have been removed from the list of organizations considered terrorist by the 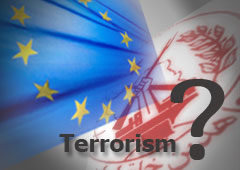 European Union. Just when the U.S. confirmed on their own … who can understand.

It is true that the decision to withdraw from the European list is motivated solely on technical issues and form such aspects of rights of defense.

But now, France has appealed this decision and the Belgian Minister of Foreign Affairs reiterated that for it, PMOI did have its place on this list.

Moreover, the text that was adopted makes it clear that several countries among the 27 "are not convinced that the Mujahedin were away from terrorism". It will be recalled that the process of withdrawal, the Swiss and the French had launched new accusations against PMOI.

It is therefore likely that PMOI will return to this famous list in July. Unfortunately, in the meantime, it has had time to recover the many assets it owns and those it had received from Saddam Hussein as a salary for being executive of his dirty works …