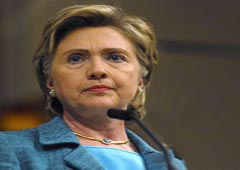 Nonsense date given by US for fixing Mojahedin status

The Wall Street Journal drew a lot of attention last week with a report that headlined that the State Department was “moving to remove” the group from the list of Foreign Terrorist organizations.

However, the explanation deep in the story did not day that at all. The article said that US officials had told the Journal Secretary of State Hillary Clinton will “make her final decision on the MeK’s status no less than 60 days after the last MeK member is relocated from Camp Ashraf” to the new site at Camp Hurriya near Baghdad.

That was a very odd formulation. Normally officials say they will make a decision no more than so many days or weeks in the future. The announcement that she will make the decision after no less than 60 days means the decision could be made in 100 days or 1,000 days or more. It means there is no deadline for a decision.

Clinton made a surprise announcement in February that she would take the Mojahedin’s willingness to cooperate in moving all their personnel from Ashraf to Hurriya into consideration when she decided whether to keep the Mojahedin on the terrorism list.

That was an odd posture since the only legal basis for keeping a group on the terrorism list is that it is terrorist. If the Mojahedin-e Khalq meets that threshold, it should be kept on the list regardless of whether it moves its people to Hurriya. And if it is not a terrorist organization, then it ought to be removed from the list even if it is fully cooperative in making the move.

Clinton said the group’s “cooperation in the successful and peaceful close of Camp Ashraf Ö will be a key factor in any decision” regarding its status as a terrorist organization. She didn’t say it would be the conclusive factor in the decision, just “a key factor.”

Combining that vague statement with the “no less than 60 days” time frame means there is really nothing there—no hint of what decision may be taken or when.

Back in July 2010, a federal appeals court ruled that the Mojahedin-e Khalq had not been treated fairly by the State Department when it was listed as a terrorist organization.

The court did not, however, order the Mojahedin-e Khalq de-listed. It simply said that the State Department had to go through the review process all over again and give the organization the full opportunity to defend itself.

The US Circuit Court of Appeals based in the District of Columbia declined to review the substance of the State Department listing in 2010. It simply dealt with process and ruled that the State Department “failed to accord the [Mojahedin] the due process protections outlined in our previous decisions.” It said the Mojahedin-e Khalq should remain listed as a terrorist group unless and until the State Department changed its position after reviewing the case file.

The basic issue that concerned the court was that the State Department notified the Mojahedin of its latest listing only after making its final decision. But the three judges unanimously ruled that the State Department had to notify the Mojahedin of the unclassified evidence it was using to list the group as terrorist and give the group a chance to rebut the evidence before it could publish a final ruling. “This did not happen,” the court said. “That deprived [the Mojahedin] of the of the due process protections detailed in our previous decisions.”

The Mojahedin had argued that its designation should be revoked because everything had changed in 2003 when it turned its weapons over to the US Army and all its members at Camp Ashraf in Iraq signed a document rejecting violence and terror.

The court decision carried a long footnote listing some of the damaging information the State Department said it had gathered about the Mojahedin-e Khalq (MEK) in recent years: “The MEK trained females at Camp Ashraf in Iraq to perform suicide attacks in Karbala;” “the MEK solicits money under the false pretext of humanitarian aid to the Iranian people;” “an August 2008 US Intelligence Community Terrorist Threat Assessment clearly states that the MEK retains a limited capability to engage in terrorist activity or terrorism;” the MEK “publicly renounced violence in 2001, but limited intelligence reporting indicates that the group has not ended military operations, repudiated violence, or completely or voluntarily disarmed;” the intelligence community “assesses that although there has not been a confirmed terrorist attack by the MEK since the organization surrendered to Coalition Forces in 2003, the MEK retains a limited capability and the intent to use violence to achieve its political goals;” and “UN inspectors say that much of the information provided to the UN by the MEK about Iran’s nuclear program has a political purpose and has been wrong.”

The court said that when the State Department reports to the court on the latest review, it must say what allegations it considers credible and is relying on for its designation of the Mojahedin as terrorist.

New reports in 2009 said that the State Department’s top counter-terrorism official at the time, Dell Dailey, had wanted to drop the Mojahedin from the terrorism list but was overruled by superiors.