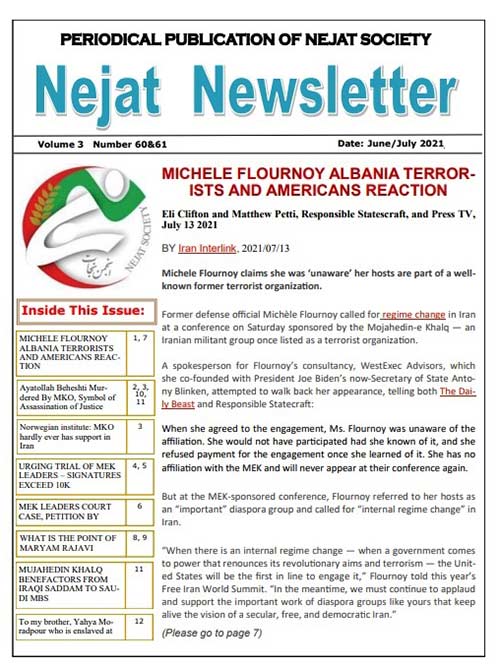 organization.Former defense official Michèle Flournoy called for regime change in Iran at a conference on Saturday sponsored by the Mojahedin-e Khalq — an Iranian militant group once listed as a terrorist organization

– Ayatollah Beheshti Murdered By MKO, Symbol of Assassination of Justice
In his weekly presser on Tuesday, Ali Rabiei said: “In the last four decades, the enemies of Iran have launched a large-scale offensive to assassinate the three fundamental valuable principles; justice, security, and freedom of our nation.”

– URGING TRIAL OF MEK LEADERS – SIGNATURES EXCEED 10K
A petition titled “Trial of MEK leaders” has been organized on the Nejat Society website. The number of signatories of this petition that “welcomes the trial of the Mojahedin-e Khalq Organization (MEK, MKO, Rajavi Cult) leaders, especially Massoud and Maryam Rajavi in international courts”, exceeded 10200 thousand by this morning. It should be noted that a court …

– MEK LEADERS COURT CASE, PETITION BY COMPLAINANTS
In a lawsuit filed inside Iran, 42 former members of the Mojahedin-e Khalq Organization (MEK, MKO, Rajavi Cult) have demanded compensation from the organization’s leaders for their lost rights.These people, who were enslaved and contained in the closed and remote Camp Ashraf in Iraq, isolated from the outside world, and subjected to the conditions of severe cultic abuse, found the opportunity to escape from the organization with the fall of Saddam Hussein’s dictatorship in Iraq and they returned to Iran.

– WHAT IS THE POINT OF MARYAM RAJAVI?
Three decades ago in 1993, Maryam Rajavi was appointed ‘president elect’ of a free Iran as envisioned by her husband Massoud Rajavi. In a once only election, in Saddam Hussein’s Iraq, with Maryam as the only candidate, the electorate – members of the Council of the National Council of Resistance (a pseudonym for the Mojahe din e Khalq) – voted for her unanimously. Turnout was 100%. She has ruled over the members ever since without even a whiff of democratic due process..

– MUJAHEDIN KHALQ BENEFACTORS FROM IRAQI SADDAM TO SAUDI MBS
The People’s Mujahedin Organization of Iran, known better by its acronym the MKO, is a terrorist group responsible for the deaths of thousands of Iranian civilians.Over the past four decades, the group has been committed to overthrowing the Islamic Republic of Iran through every possible means.

– To my brother, Yahya Moradpour who is enslaved at MEK camp
Yahya Moradpour, was captured by the Iraqi Ba’athist army in 1980, at the beginning of Iran-Iraq war.
In 1989, he was handed over to the Mujahedin-e Khalq cult by the Baath Party and transferred to the group’s camp called Camp Ashraf. From then on, Yahya’s family have had no news of him. They did not
even know if the fog was alive or dead.

Quincy Institute: MEK, a proxy force for Israel and Saudi Arabia against Iran