A State Department Spokesman says the US administration will not change the terrorist status of the Mujahedin Khalq Organization (MKO).

“We’ve already done a review and it was determined that there would not be a revocation of that status for the Mujahedin-e Khalq, so nothing has changed from our standpoint,” Robert Wood said at a briefing on Monday, when asked if Washington would follow the action taken by the European Union. 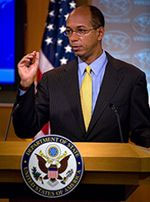 The EU removed the MKO from its list of terrorist organizations on Monday. The move outraged the Iranian Foreign Ministry, which in a statement, called the decision incomprehensible.

Wood added that there had not been ‘any change at this point’ in the status of the MKO, suggesting that the new administration was unlikely to alter its stance on the outlawed group.
The US announced on Jan. 12 that labeling the MKO as a terrorist group was an appropriate act and that the group had to remain on the blacklist.

The MKO, blacklisted as a terrorist organization by many international entities and countries including the US, is responsible for numerous acts of violence against Iranian civilians and government officials.
The group also attempted an unsuccessful invasion of Iran in the last days of the Iraq-Iran war in 1988.The MKO was involved in the massacre of Iraqis under former Iraqi dictator Saddam Hussein.