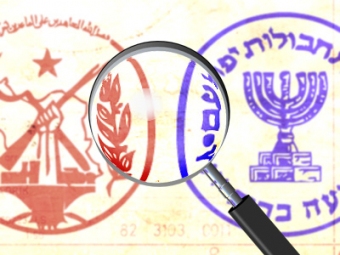 Following the arrest of Iranian nationals on spying charges in Israel, Mohammad Razaghi, a former member of the terrorist Mojahedin Khalq organisation reveals his personal knowledge of one of these individuals. Ali Mansouri has been a long serving member of the organisation who acted as a go between for the MEK with Mossad, and who travelled to Iran to gather information for them.

Ali Mansouri was a close member of the MEK for at least 30 years. During that time he was well known in the organisation as a go between for the Mojahedin Khalq’s secret section (known as ET or Etelaat) and Mossad. Many ordinary members of the ET section of the MEK remember him because every now and then they were tasked to do things for him.

According to an NCRI (National Council of Resistance of Iran, aka MEK, PMOI, MKO, Rajavi cult) statement [in response to his arrest], “Since 1980, Ali Mansouri has been a merchant in Turkey and expressed sympathy for the PMOI”.

In reality, Ali Mansouri was resident in Turkey between 1980 and 1998 and was in charge of gathering intelligence from inside Iran. He himself would travel to Iran every now and then. The MEK, of course, was very keen to keep him and his work secret.

I remember clearly a few times that I was tasked to go to see him to collect some pictures and documents about Mehrabad Airport and Jamaran H.Q. and to bring them to our safe house and hand them over to my commanders. At that time he was working under cover as a businessman and would travel to Iran regularly. He and his network were clearly spies working on sensitive information inside Iran.

On some other occasions I witnessed his participation in the financial affairs of the Mojahedin Khalq in Turkey, like renting offices and houses to be used as open and covert safe houses in Istanbul.

Ali Mansouri obviously had a lot of information about the MEK and their work and as a long time serving intelligence officer of Etelaat (or Mokhaberat as the MEK used to call it in Saddam’s era), it is obvious that he would have been introduced to Mossad. It was no secret to us even in those days that he was working as an agent between MEK and Mossad and that is why he travelled personally to Israel a few times. Although, as usual, he used the cover of “Business” and “Trade”, there is no doubt that he was in close contact with and worked with the MEK and Mossad during his visits to Israel.

But what happened this time?

I believe that after the failure of the MEK in trying to create yet another nuclear revelation in their own name, (this time bringing out Saddam’s infamous torturer Mehdi Abrishamchi to announce it), and after everyone witnessed the cold response of the media and political circles to their new show, they have decided that the work of Ali Mansouri has not been good enough or maybe he has not been truthful enough with them and is therefore a traitor, or any other cultish reason that they come up with, and therefore they have decided to set him up and in this way they can get rid of his information (he can’t talk if in an Israeli prison), and also use it as propaganda in advance of the nuclear talks in Geneva.

In its statement, the NCRI (aka Rajavi cult, MEK, MKO) claim that:

“In July 2005, without prior invitation, he participated in the celebration of the anniversary of Mrs Rajavi’s liberation [from French custody on terrorism charges] and under the pretext of handing a letter to Mrs Rajavi, he attempted to get close to her but failed as he was stopped by her security.”

The questions to the terrorist cult is:

– why didn’t the MEK announce the nature and connections of Ali Mansouri in 2005 so that he would be exposed and not able to continue?

-Why did it take 30 years for MEK leaders to find out that a close member of theirs is working for the Iranian Revolutionary Guards?

-MEK leaders overtly and easily label all and every ex member and critic as a member of the Iranian Revolutionary Guards and give out daily statements to this effect. Why is it that they did not give a statement about a real member. Why did it take over 10 years to suddenly wake up and give a statement now?

In another part of the statement the NCRI (Rajavi cult) say:

“The NCRI Security and Anti-terrorism Commission learned in 2007 that although this individual has Belgian nationality, he covertly travels to Iran under the pretext of visiting his brother. Hence, it advised PMOI supporters to disassociate from him.”

The NCRI Security and Anti-terrorism Commission have apparently been so disoriented that they have gaffed again, a big gaffe.

The question is: From 2007 until now you have distributed hundreds of statements against every ex member and every critic of the cult (including the latest one with all the clearly unfounded lies and misinformation misusing all sorts of sources which do not exist) and spent millions to silence your critics. What happened to this particular case? Why is it that your statement hasn’t been seen until 2013? Is it not the case that he was under your (and Mossad) protection?

As someone who has known him, yes, Ali Mansouri has been travelling to Iran. But again, I know that he was travelling as an agent of the Mojahedin Khalq and Mossad. As shameful as it is, the cult, Rajavi, and their paymaster Mossad have yet again sacrificed a 30 year long serving intelligence officer to cover up their recent failures as well as getting rid of him and the information he is carrying.

Tens of Members Defect MKO upon Arrival in Albania