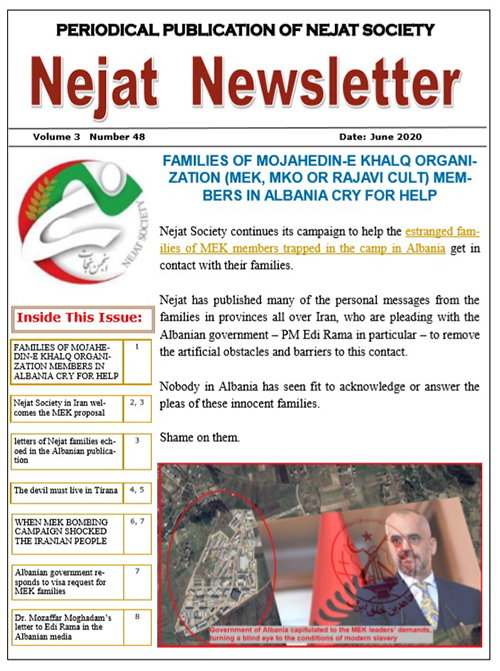 Nejat Society continues its campaign to help the estranged families of MEK members trapped in the camp in Albania get in contact with their families. Nejat has published many of the personal messages from the families……

– Nejat Society in Iran welcomes the MEK proposal
According to several websites of the Albania based Mojahedin-e Khalq Organization (MEK, MKO), an open letter dated June 23, 2020 has been written by a number of organization members, who are based in the MEK camp in Manza, to some Albanian officials. In this letter….

– The devil must live in Tirana
Terrorists or democrats? Albania is home to 2500 Iranian People’s Mujahedin. Their goal is to overthrow the Iranian regime. They also maintain good contacts in the German Bundestag…..

– WHEN MEK BOMBING CAMPAIGN SHOCKED THE IRANIAN PEOPLE
.. Members of the MEK have never accepted the revolution, and on June 28, 1981, three years after the revolution, they bombed the Islamic Republic Party headquarters in Tehran. This horrendous crime was committed during a meeting of party leaders….

– Albanian government responds to visa request for MEK families
An Albanian government official, in response to a question from a member of parliament who had asked why Iranians, especially families who want to visit their loved ones in the Mojahedin-e Khalq (MEK) camp in Albania, were not given visas, said: “This decision was made out of fear of the influence of Iranian terrorists and for security reasons.”…

– Dr. Mozaffar Moghadam’s letter to Edi Rama in the Albanian media
.. the sister of Seyyed Nafis Mozaffar Moghadam, a member of the Mojahedin-e Khalq Organization (MEK, MKO) in Albania, wrote a letter to Prime Minister Edi Rama urging him to remove obstacles to communication with his brother at the MEK camp…