The MEK started training him as a cult member since he was four years old.

“We used to march in front of the portraits of the so-called martyrs of the organization. We were so manipulated that I did not miss my mother at all,” 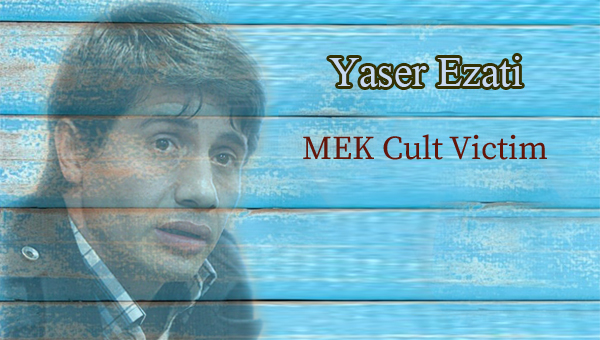 His father was a high ranking member of the MEK and his mother was killed in the MEK’s deadly military operation against Iran “Forough Javidan”. Yaser was then sent to Germany together with hundreds of children of the MEK members in 1991. From there, he was transferred to Canada. He lived a challenging life with a number of MEK sympathizers in Germany and Canada.

In just one of his traumatic life experiences with MEK sympathizers, he recalls Forough, the mother of Neda Hassani – the 17-year-old girl that set herself on fire to protest the arrest of Maryam Rajavi by the French Police in June 2003. Yaser lived in Forough’s house in Canada for a period of time. He writes of Forough’s aggressive behavior against him:

“One morning in the winter, I missed the school bus. I got back home to tell Forough that I would take the next bus to school. All of a sudden, she stood up and grabbed me by collar and pulled me on the flour toward the garage where she started beating me. She kicked and bit me so awfully that I was not able to stand on my feet. At the time I was thirteen years old and Forough used to attack me at the slightest pretext.”

Yaser was returned to Camp Ashraf, Iraq a few years later in order to receive systematic organizational and military training. “The MEK forced me to stay in Iraq for seven years, I was kept in solitary confinement for fourteen months before I could leave the group,” he told MNA.

When he first asked to leave the group, they showed him a testament allegedly written by his mother in which it was written: “You should take a gun and follow my path”.

“Whenever I missed my family, may father would kick me in response”, he recounts.