He has been a member of Sweden Parliament since 2010 but he was born in Kermanshah, Iran in 1987. Three years later in Camp Ashraf, his Mujahed parents left him in the hands of the agents of the Mujahedin Khalq Organization (the MKO, MEK, PMOI, Cult of Rajavi) to take Hanif to Europe together with hundreds of other children of the MEK members.

Hanif is a successful Swedish citizen now because he is one of those few lucky MEK children who was not returned to Camp Ashraf, Iraq, to receive military training. However, in an interview with Manoto TV in 2016, he recounted heartbreaking stories of his childhood as an orphan in a foreign country. This is what he said about his biological parents: “Mothers were allowed to call their children only once a year. My father has called me only twice in my entire life.” 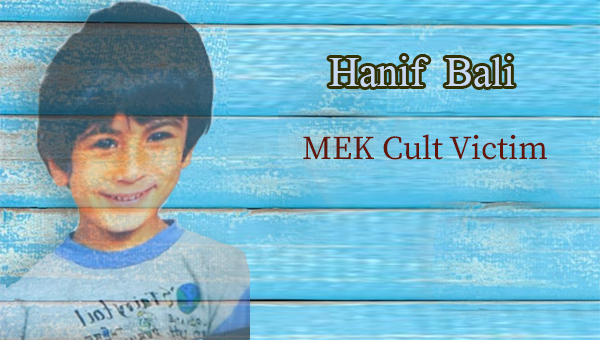 Hanif arraived in Sweden when he was three years old and moved between eight different families until he turned 18. He spoke of his several moms, “When I was told “your mom”, I had to ask “Which mom?” because I had several moms. “

Today, you can find out a few new details of Hanif’s challenging childhood among his diverse parents and families. On May 2017, he wrote a short caption for a photo of himself by the side of his biological father on his Instagram account: “I met my biological father at 13:30. I do not think DNA test is necessary” (referring to their high resemblance).

Another significant photo shows baby Hanif next to another man. The clarifying caption explains his controversial life far from his biological parents:

“In my entire childhood, I had a lot of fathers. Father is not always biologic or the one who you lived with more or the one who was kinder or more violent than others. Sometimes your dad can be the one who you had the most challenging relationship with but he was the same person who you knew profoundly and loved the most. I have portraits of several fathers in my mind but I had only one dad. I miss him every day.”