The presence of the organization [MEK] in Iraqi territory has nothing to the Iraqi nation except danger.

The recent annual report of the Department of State might not have anything new on the status of the Iranian Mujahedin Khalq Organization which has been designated as a Foreign Terrorist Organization since years ago. But the speech made by Condoleeza Rice following the publication of the new list, which called the group as substantially terrorist, should be taken as serious.

The MKO tries to pretend that it has denounced terrorism and represents a peaceful struggle because they claim to have abandoned violence for years. But, the investigations by the State Department’s experts did not include its recent acts but the terrorist nature of MKO of which its ideology and strategy completely originates and will never get separated. MKO is a destructive cult with a terrorist potential, according to the experts, and will not lose such potentiality without arm and camp and will never miss its real nature.

Therefore from a technical viewpoint – if one doesn’t want to work on political interests and benefits – the investigation on the nature of a group is prior to its short-term functions. If we don’t evaluate the nature correctly, we will make mistake in viewing its short–term function, as many unprofessional people made the same mistake.

Terrorist designation of the groups or entities by various countries is primarily done due to the national security (although sometimes the lists get a political flavor) and its objective is to determine the organization with terrorist potentiality and take them under direct supervision.

However, the designation of the terrorist nature of a group is based on the interests and acts of the group through its background and many other criteria, so it requires a deep and multilateral investigation.

We do not intend to punish before the commitment but we want to investigate this case more deeply trying not to view MKO’s short-term claims as a base.

The nature we are discussing includes long-term functions and we would like to confirm that the potential capacity of MKO will be definitely actualized if the condition is appropriate and when the facilities are provided eventually the previous status will be revived.

The cult-like and terrorist nature of MKO requires it to commit terror acts in case of necessity, because it has theorized the engagement in violence in its theory system. Therefore such an organization is always dangerous for its environment. It is a destructive risk for the security of every society and could be considered as a substantial threat. Thus it must be restricted and neutralized.

Unfortunately, today the main body of MKO is located in our country. Saddam Hussein brought them to our territory due to his own benefits as well as other disasters he left for us. The west that has once used the group against the Islamic Republic, now doesn’t want to accept them in its soil. This is exactly like they want to get rid of their nuclear garbage that they have used it and now that it is a threat they want to get rid of it. The presence of MKO in our territory brings nothing except danger and threat to Iraqi nation who has no reason to suffer the risks of this nuclear garbage. The west should keep them in its own territory since they are well aware of their threats.
Al Mo’tamar Newspaper 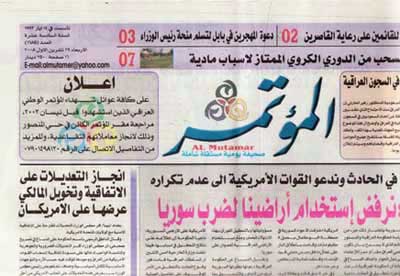 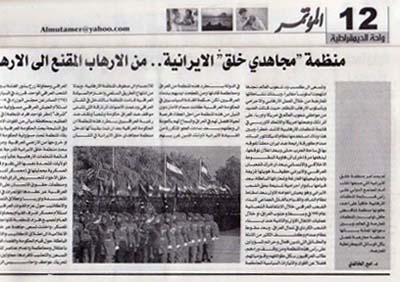