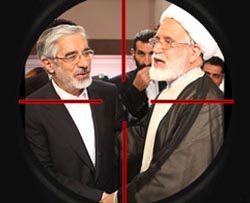 Jahan News quoted an unnamed source that five hit squads, had entered Iran as part of a concerted effort with the aim of assassinating the two opposition figures.

In the event, the report says, “with the vigilance of the intelligence and security bodies,” these plans were foiled when four of the hit-squads were arrested and one fled.

According to the report, the would-be assassins were from the terrorist Mojahedin-e Khalq Organization (MKO) and had entered the country from the southwestern province of Khuzestan, bordering Iraq and the Persian Gulf.

They were reported to have received training at the MKO-run Camp Ashraf in Iraq.

The main intention of the operation was to attribute the assassination of Mousavi and Karroubi to the Iranian government, the report added.

The report notes that in the run-up to the June 12 presidential election, “a number of anti-revolutionary groups had intended to carry out a similar plan by placing a bomb in the aircraft carrying [former President] Seyyed Mohammad Khatami, which was foiled by the flight security forces.”

Jahan News did not reveal the identities or genders of the terrorist detainees, or whether the assassination plan was foiled before or after the election.

The MKO, a terrorist group on the proscribed lists in Iran, Iraq, USA and Canada, was housed, funded and armed by the former Iraqi dictator Saddam Hussein in return for attacks against Iran.