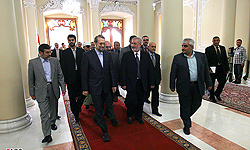 Speaking to the reporters in a joint press conference with his Iraqi counterpart, Larijani expressed the hope that close cooperation between Iran and Iraq will lead to expulsion of anti-Iran terrorist group, the Mojahedin-e Khalq Organization (MKO), from the region.

Larijani told reporters that Tehran-Baghdad security cooperation would help expel the MKO members from Iraq where they are held in Camp Ashraf.

"We hope mutual talks on various issues will help improve regional security and expulsion of terrorist groups including MKO from the entire region," he said, the Islamic Republic News Agency reported.

Al-Samarraie announced that he had already extended an invitation to Larijani to visit Iraq.