Iranian Foreign Minister Manouchehr Mottaki in a meeting with his Norwegian counterpart Jonas Gahr Store in New York cautioned about the results and aftermaths of the interference of certain countries and intelligence services in the relations between the two countries.

"Certain measures taken by the third countries and intelligence services in Norway, especially in connection with Oslo-Tehran relations, are the cause of the weakening ties between the two countries," Mottaki said at the meeting held on the sidelines of the UN General Assembly on Friday.

Cautions about Third-Party Interference in Iran-Norway Ties
Mottaki further viewed the activities carried out by the members of the anti-Iran terrorist Mojahedin-e Khalq Organization (MKO) in Norway as another negative issue affecting the ties between the two countries.

Gahr Store, for his part, reiterated his country’s willingness to expand ties with Iran, and called for the continuation of such relations with Tehran.

Some other ranking members of the MKO who have had a role in the assassination of a large number of Iranian citizens and officials are currently living in Europe.

The group started assassination of Iranian citizens and officials after the Islamic Revolution in a bid to take control of the newly established Islamic Republic. It killed several of Iran’s new leaders in the early years after the Revolution, including the then President, Mohammad Ali Rajayee, Prime Minister, Mohammad Javad Bahonar and the Judiciary Chief, Mohammad Hossein Beheshti who were killed in bomb attacks by MKO members in 1981.

Many of the MKO members have abandoned the terrorist organization while most of those still remaining in the camp are said to be willing to quit but are under pressure and torture not to do so.

The most shocking of such stories includes accounts given by former British MKO member Ann Singleton and Mustafa Mohammadi — the father of an Iranian-Canadian girl who was drawn into the group during an MKO recruitment campaign in Canada.

Mohammadi recounts his desperate efforts to contact his daughter, who disappeared several years ago – a result of what the MKO called a ‘two-month tour’ of Camp Ashraf for teenagers.
He also explains how the group forces the families of its recruits to take part in pro-MKO demonstrations in the western countries by threatening to kill their loved ones.

Lacking a foothold in Iran, the terrorist group recruits ill-informed teens from Iranian immigrant communities in the western states and blocks their departure afterwards. 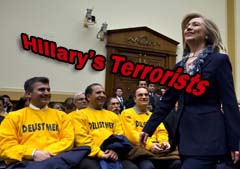 Long March of the Yellow Jackets: How a One-Time Terrorist Group Prevailed on Capitol Hill MKO, June 20, anniversary of collapse of a dream