WASHINGTON (AP)–A cult to some and freedom fighters to others, the National Council of Resistance of Iran and its affiliate groups typify the gray areas in the often black-and-white world of the war on terror. While they’ve been designated foreign terrorist organizations by the U.S. State Department, the groups’ members still maneuver between the restrictions aimed at disabling them.

The organization’s former U.S. representative freely walks the streets and has a contract with Fox News as a foreign affairs analyst. Lawmakers write letters on the group’s behalf. And former intelligence officials say the group maintains contacts in defense circles, although the Pentagon denies it.

The former U.S. representative for the council, Alireza Jafarzadeh, says the U.S. government listed his organization as terrorists to appease moderate elements within the Iranian government. He’s hoping the Bush administration will lift the terrorist designation…

The mission of the National Council and its military wing – the Mujahedin-e-Khalq or MEK – is to overthrow the Iranian regime, an aim increasingly in line with the Bush administration. Yet the administration has stopped short of calling for regime change.

As soon as the State Department created a list of terror organizations in 1997, it named the MEK, putting it in a club that includes al-Qaida and barring anyone in the United States from providing material support. By 1999, the department designated the MEK’s political arm, the National Council of Resistance, and related affiliates.

The State Department says the MEK groups were funded by Saddam Hussein, supported the seizure of the U.S. Embassy in Tehran in 1979 and are responsible for the deaths of Americans in the 1970s.

Despite the listing, the council and a related offshoot continued to file foreign agent registration documents with the Justice Department, cataloging meetings with dozens of members of Congress, media interviews, rallies and speeches.

It saw successes. In 2002, 150 members of Congress wrote a letter to the State Department advocating the organization be removed from the terror list.

But 2003 was a rocky year. After Saddam was toppled, the administration struggled with how to handle MEK fighters detained at training camps in eastern Iraq. They were eventually disarmed, but remain in limbo today at the camps.

In August of that year, the State and Treasury departments also froze the council’s assets and shut down their Washington offices, blocks from the White House.

A State Department official said U.S. policy toward the MEK and its affiliates has not changed. The official, who spoke on the condition of anonymity, said the group is still considered a threat because of its history of launching terrorist attacks.

But others find the sometimes soft approach to the MEK alarming. Further complicating the issue, the report from the top U.S. weapons inspector in Iraq said the group received oil as part of the scandal-tainted oil-for-food program, earning it millions of dollars in profits.

The MEK calls the appearance of its name in seized documents a smear campaign.

As U.S. focus on Iran increases, some wonder whether the MEK will play a role. A former senior intelligence official said some in the Pentagon see the MEK as a potential ally in their efforts against the Iranian regime.

But a defense official denied contacts with the MEK are occurring. Michael Rubin, who used to handle Iran issues at the Pentagon, said those he knew there hated the group.

"Even if they are not terrorists, although I believe they are, any group that tells its members who to marry and when to divorce, the United States should not be doing business with. They are very cult-like," Rubin said.

Rubin notes that, while council officials revealed the existence of two secret Iranian nuclear sites in 2002, they nevertheless have an inconsistent intelligence record, often getting information "dead wrong."

Yet the council’s former U.S. representative, Jafarzadeh, highlights the intelligence successes as evidence that the U.S. should support the Iranian opposition and advocate a policy of regime change in Iran. In an hour-long presentation this month, he laid out details of Iran’s nuclear program at an intellgence conference in Northern Virginia.

The Foolish Embrace of the MEK

Why are some Americans defending an Iranian terrorist group? 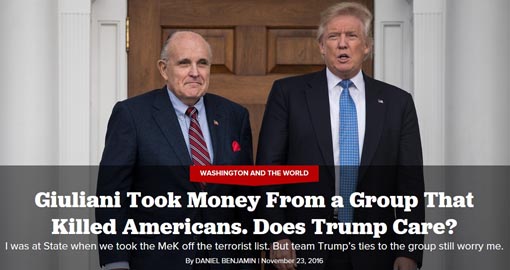 I was at State when we took the MeK off the terrorist list. But team Trump’s ties to the group still worry me.

Who cares about the MKO?