CAMP ASHRAF, Iraq — The more than 3,000 people living here once represented a powerful paramilitary organization bent on overthrowing the government in Iran. In the 1970s, the group killed Americans in Tehran, and after being given refuge by Saddam Hussein its members were suspected of serving as a mercenary unit that took part in his violent suppression of the Kurds in the north of Iraq and the Shiites in the south.

Now they are unwelcome in Iraq but believe they should be given protection in the United States — even though their group, known as the People’s Mujahedeen of Iran, remains on the State Department’s list of terrorist organizations.

“You probably have in mind Hawaii,” said Ambassador Lawrence E. Butler, the American diplomat who has been negotiating with the group in recent sessions here.
“I suspect you don’t want to go to Guantánamo,” he added.

For the last three months, Mr. Butler, who is the foreign policy adviser to Gen. Lloyd J. Austin III, the top American military commander in Iraq, has been shuttling back and forth almost every week on the American embassy’s behalf between Baghdad and Camp Ashraf, an outpost in Diyala Province near the Iranian border. Offering humor and bluntness, he has sought to cajole the exiles to leave their camp and avert what will almost certainly be another violent confrontation with the Iraqi security forces if they stay.

As the American military begins its final withdrawal from Iraq, the situation at Camp Ashraf is among the most vexing of the unfinished chapters of the American war here.

The group adheres to an ideology that is a mix of devout Shiism and Marxism, and in the initial phase of the war the Americans bombed the camp and killed several of its members before disarming the group, which had more than 2,000 tanks and armored personnel carriers. But the Americans later provided security for the camp as the Iraqi government, which is friendly with Iran, turned hostile to the group. A raid on the camp in April by the Iraqi Army left dozens dead and hundreds wounded.

Mr. Butler’s mission has been to seek a solution that will save residents’ lives by first moving them to another camp away from the Iranian border, and then to other countries for resettlement. His goal is humanitarian, he said. He betrayed no sympathies for the group’s politics or forgiveness for its misdeeds. He wants them to move, he said, because he fears a slaughter at the hands of the Iraqi Army if they stay.

That solution has proved tricky, however, because the residents are refusing to leave, and no countries have come forward to welcome them. But the clock is ticking, and several times Mr. Butler has reminded members of the group that American forces will be leaving.

For Mr. Butler, the former ambassador to Macedonia whose diplomatic career has placed him across the negotiating table from members of the Irish Republican Army and war criminals in the Balkans, the current dealings have proved just as tough.

“If I don’t get assurances that you will move to a new location in Iraq, the next round of negotiations could be very short,” he admonished the group near the end of the recent session.
After a half-dozen such sessions, he has made little progress in getting the group to agree to leave the camp before Prime Minister Nuri Kamal al-Maliki’s government follows through on its promise to shut it down by the end of the year.

Adding to his difficulties, the group has a formidable and well-financed communications machine. It has attracted political figures like Howard Dean and Wesley K. Clark, the retired Army general, by paying them to make speeches in support of the group, fueling its resistance to a move and angering officials trying to bargain with it, like Mr. Butler.

To this, one member replied that none of the group’s famous advocates were “doing it for the money.”

“I’m guessing about a million dollars was spent on this over the last six months,” Mr. Butler said, referring to the overall advocacy campaign. “If I was on your board of directors, I wouldn’t be pleased with the results.”

In an interview, General Clark acknowledged having been paid by the group, but he said he gives speeches around the world and always offers his “own personal opinion” based on his many years of government service. (Mr. Dean has previously said publicly that he took speaking fees from the group.)

In a written statement, a representative for the group said it had not paid anyone for speeches.

That the group has access to money from the Iranian dissident diaspora is evident in the modern, well-appointed conference room full of flat-screen monitors. Men in suits served beverages and snacks on silver platters during the recent talks.

Mr. Butler is keen to puncture what he believes is the false narrative that has sprouted around the group since the American invasion, which has helped it secure such prominent support. Contrary to widespread belief, he says, the group never provided any valuable intelligence to the Americans about Mr. Hussein’s government. Nor, he says, has it provided any useful information about the Iranian government or its nuclear program.

He said that for six years the group provided unreliable information about Iran to the Defense Intelligence Agency, which he criticized as having taken years to discern that it was being fed what amounted to a slew of lies.

“They are very good at telling stories,” he said of the group.

Through legal actions, the group has managed to get its name removed from terrorist watch lists in Britain and the European Union; a federal lawsuit in the United States resulted in a judge ordering the State Department to review its classification of the group. The group has not carried out an attack in years, and says it renounced violence in 2001.

The State Department’s public documents show a litany of violent crimes against Americans in the 1970s, including the assassination of military officers and executives in Tehran.
“These people slaughtered Americans,” Mr. Butler said out of earshot of the group’s representatives during the recent negotiating session. “They have blood on their hands.”

The Americans have offered a plan in which the group’s members would vacate this camp, which during Mr. Hussein’s tenure served as a military base, and relocate to another site in Iraq, where they would disband, an essential step before the United Nations would recognize the members as refugees.

“To the outside world, you look like a paramilitary organization,” he told them, before adding, “As a group you are dangerous.”

For now, Mr. Butler is not optimistic about the prospects of getting the group to move, or disband. After a helicopter flight back to the American Embassy in Baghdad after the session, he shared his worry of a lack of political will back home.

“My prediction is Washington is not going to give me any backup,” he said. “It’s just poison. It’s terrorism. It’s Iran. It’s Iraq.” 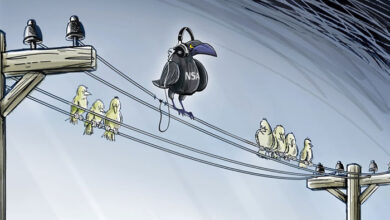 Handling Of Iran Is Juvenile. MEK the darling of Trump Admin