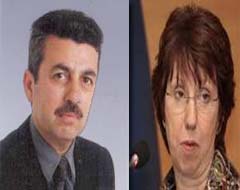 During the 1 December session of the Foreign Affairs Council in Brussls, the situation of the Peoples Mojahedin of Iran (PMOI) and their base “Camp Ashraf” in Iraq, will surely come up.

The clashes between Iraqi security forces and Camp Ashraf residents in the past, as the imminent bloodshed during the announced closing of the camp on 31 December led you, Mrs. Ashton, to appoint Mr. Jean de Ruyt as advisor in this special issue.

Following the Press, the acceptance in the member countries of some of the Iranians living in Camp Ashraf will be discussed at the 1 December session.

We want to warn you explicit to avoid a harum-scarum acceptance of those people.

The Camp Ashraf inhabitants are part of a cult-like Organisation with a personality cult on the leaders Massoud and Maryam Rajavi. In the last decades they were separated from the outer world, especially from their families, to put their lives completely at the service of the organisation. Most of them are not at the height of technology and even do not know, how to use a cell phone or the internet. To wrench those people out of “their world” and put them in a foreign country and in an unknown world, will tighten them to the organisation.

The UNHCR told that in order to determinate their refugee status, individual interviews will need to take place in a safe, neutral and confidential location. Also the Iraqi government has signalled to support this procedure.

We would suggest, bringing the people from Camp Ashraf in contact to their families in connection with this interviews.

Based on the fact, that nearly 70% the Ashraf inhabitants live there because of the pressure and under the influence of the PMOI propaganda, several even against their will, bringing them in contact to their families could be a possibility to solve the problem.

The return to Iran, witch is vehement preached by the PMOI to be no option, could be a possibility for the people to reunite with their families and free from the influence of the PMOI.

The ICRC has repatriated several hundred Ashraf defectors to Iran during the last years, without them being persecuted or oppressed by the Iranian regime.

Only up to 350 of the 3400 people in Camp Ashraf are facing a persecution by Iranian or Iraqi law enforcement agencies, which those people are committed cadres and PMOI leaders.
There are whispers, that the organization is working on “evacuating” their leaders from Camp Ashraf and bring them through Turkey to the EU illegal,while the other members should be immolated as “Martyrs” in the battle against the Iraqi troops.

To prevent such a bloodshed we are convinced, that it is necessary to offer the Ashraf residents the contact to their families and the “real world” outside the organization and the gates of Camp Ashraf, to reveal them alternatives to the violent fight for Camp Ashraf, which they presumably do not beware of because of the PMOI propaganda and indoctrination.

We want to give the people in Camp Ashraf the possibility to recognize, that they can decide on themselves, if they want to get back home to their families, or try to get asylum in other countries or fight for Camp Ashraf.

Certainly it will be necessary to accept a certain number of people in the EU and we urge each EU member country to do their bit to a humanitarian solution of this problem. But to prevent the Ashraf residents from the PMOI influence, it is essential to bring them together with their families and show them, the reality is not like the PMOI has constituted it since decades.

For some time past, there is a network of PMOI defectors, families of Ashraf residents and several NGOs who work hand in hand with the Iraqi government and so were able to bring PMOI defectors, who managed to escape from Camp Ashraf by their own, back to their families. The UNHCR and the EU can fall back to this network to make this way possible to all people in Camp Ashraf.

On this reason we urge you to take a stand for this way at the session of the Foreign Affairs Council in Brussels on 1 December and discuss it as a serious option and as a preliminary step to a resettlement to third countries.