Azerbaijani Ambassador to Iran Javanshir Akhundov denied any support from the country for the Mujahedin-e Khalq Organization (MKO)terrorist group. 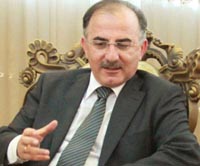 He said, “MKO’s ideology is based on Communism and Marxism which is in opposition to ours.”

“Why should we help PJAK? This group stands against our ideology,” said Javanshir Akhundov in response to a question about his country’s stance on MKO and PJAK terrorist groups, Habilian Association (families of Iranian terror victims) database reported.

He further explained that this group is “the enemy of our friends, Iran and Turkey. What is our interest in supporting them?”

Denying any Azerbaijan’s support for MKO terrorist group, Akhundov said that “MKO ideology is based on Communism and Marxism which is in opposition to ours.”

“Communism and Marxism brought about a lot of damages to Azerbaijani people; we do not accept them (in Azerbaijan).”

Azerbaijani Ambassador to Iran went on to say that," Mujahedin-e Khalq Organization members are living at a camp in Iraq, from which they are increasingly escaping to other countries.”

“Approaching one or two of them to the UN office in Baku is not enough to raise objections against UN office.”