On Tuesday, June 5, 2012 around noon, a group of Iranian residents in France gathered outside the courthouse in the square of St. Michael to deliver their protest against the terrorist Rajavi cult.
The event attracted the attention of French citizens and raised many questions in the minds of the French. Passers- by asked for leaflets and posed the question, ‘how are these terrorists allowed to stay in France?’ They also wanted the court punish these terrorists and expel them from their territory. France is not the refuge of terrorism. 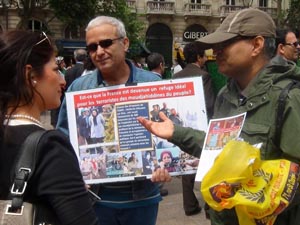