Introduction
The People’s Mujahedeen of Iran, more commonly known as the Mujahedeen-e-Khalq or MEK, is

listed as a Foreign Terrorist Organization (FTO) by the United States for its killing of U.S. personnel in Iran during the 1970s and its links to Saddam Hussein in the 1980s and 1990s. The U.S. State Department is considering whether to delist the group, a decision expected later this year.

— — The MEK helped Islamists overthrow the Western-backed Shah in 1979, but broke violently with the clerics shortly after the revolution and were forced into exile in France in 1981. The group moved its base of operations to eastern Iraq in 1986, but a new Iraqi regime has called for the group to be resettled elsewhere in 2012. International efforts have been under way to relocate the group to a temporary base outside Baghdad and then eventually to other countries. The State Department considers MEK’s successful relocation as a "key factor" in its forthcoming decision about delisting. The group publicly renounced terrorism in 2001 and has waged a sophisticated lobbying campaign in Washington to have its official status changed.

Roots of Resistance
MEK was founded in 1963 by leftist Iranian students opposed to the monarchy of Shah Mohammad Reza Pahlavi and its supporters in the West, including the United States. Many of MEK’s leaders–including current chief Massoud Rajavi–were imprisoned by the Shah in the 1970s, and several were executed. MEK participated in the 1979 revolution that swept Ayatollah Khomeini into power and supported the takeover of the U.S. Embassy that year. However, MEK’s ideology–a blend of Marxism, feminism, and Islamism–put it at odds with the Ayatollah Khomeini government. The group soon began plotting against the Islamic new government, killing dozens of senior government officials, including the president and prime minister. The clerics retaliated with the arrest and execution of Mujahedeen. Eventually the group was driven into exile in Paris, where Rajavi set up the National Council of Resistance in Iran (NCRI), also known as MEK’s "parliament in exile."

In 1987, the Chirac government expelled Rajavi and much of the MEK as part of a French-Iranian deal (NYT) that freed French hostages held by pro-Iranian groups in Lebanon. The MEK was welcomed into Iraq, where it helped Saddam Hussein wage the eight-year Iran-Iraq War and battle Kurdish uprisings in the north. According to the U.S. State Department, Baghdad armed MEK near the end of the Iran conflict (1980-88) "with heavy military equipment and deployed thousands of MEK fighters in suicidal, mass wave attacks against Iranian forces." Iran’s Revolutionary Guard killed some two thousand MEK in this failed assault, known as "Operation Eternal Light."

MEK’s campaign against the Islamic Republic, including the assassination of high-ranking officials, continued throughout the 1990s and early 2000s. Following the 2003 invasion of Iraq, U.S. forces disarmed the group of heavy weaponry and sequestered it in Camp Ashraf, a 14-square-mile former Iraqi military base in the country’s northeast.

Leadership & Ideology
MEK is led jointly by husband-and-wife team Massoud and Maryam Rajavi, and represents the largest militant Iranian opposition group committed to the overthrow of the Islamic Republic. It is also "the only army in the world with a commander corps composed mostly of women," says former CFR press fellow Elizabeth Rubin. Maryam Rajavi joined the resistance as a student in Tehran in the early 1970s and, at the behest of her husband, assumed joint control of the group in 1985. Feminism and allegiance to the Rajavi family are pillars of MEK ideology, which was founded on both Islam and Marxism–though the group has denied its affiliation with the latter, Rubin says. Some analysts have characterized MEK as a cult (BBC), citing the group’s ardent fealty to the Rajavis and the observance of bizarre practices such as "eternal divorce" and celibacy. Older women were required to divorce their husbands in the late 1980s, and younger girls cannot marry or have children.

Maryam Rajavi was chosen as president-elect of the NCRI in 1993 and, according to the group’s website, expects to oversee a six-month democratic transition in Iran "once the mullahs are toppled." Based out of Paris, she also serves as the group’s chief ambassador to the international community. NCRI’s political platform includes support for human rights, women, capitalism, religious freedom, minority rights, and Iran’s integration into the global community. Massoud Rajavi disappeared following the invasion of Iraq in 2003; his whereabouts and current status are unknown. "Cult leaders generally don’t retire," says Karim Sadjadpour, an Iran expert at the Carnegie Endowment for International Peace. "They either die or go to prison. I’d be surprised if Massoud Rajavi is still alive," he says.

Size & Support Structure
The U.S. State Department puts MEK global membership between 5,000 and 10,000, with significant contingents in Paris and other European capitals where the group maintains offices, according to an August 2011 report. Approximately 3,400 MEK members reside in Iraq. As of July 2012, two-thirds of them have relocated from Camp Ashraf to Camp Liberty (AFP), a former U.S. military base outside Baghdad.

An MEK front group kept a branch in Washington, DC, until the U.S. Justice Department closed it in 2003. Nonetheless, the group continues to operate a sophisticated network of advocates in the United States (USNews), enlisting the support of dozens of high-profile advocates, including former U.S. officials such as former New York City mayor Rudolph Giuliani and former governors Edward Rendell and Howard Dean. The advocacy is centered on the campaign to delist MEK as a U.S.-designated terrorist organization.

Until 2003, the MEK received funds, arms, and state sponsorship from Saddam Hussein. Since the Iraq invasion, MEK has relied on donations from Iranian expatriates and front organizations that often campaign for greater human rights in Iran, according to the State Department.

Exodus from Ashraf
As part of the 2003 invasion, U.S. forces initially attacked MEK military targets in Iraq despite the group’s claims of neutrality. The sides eventually negotiated a cease-fire that disarmed MEK members and confined them to Camp Ashraf. In 2004, Washington granted the group "protected persons" status under the Geneva Convention. That designation expired after Iraq regained full sovereignty in January 2009.

MEK had long feared that a transition to Iraqi control of Ashraf (PDF) would result in their eviction, according to the Congressional Research Service. As U.S. forces pulled out of Ashraf in April 2011, violence broke out between the Iraqi military and camp residents. Thirty-five MEK were killed, according to the UN. After the incident, Iraq reiterated its vow to close Ashraf following full U.S. withdrawal at the end of 2011. Iraq and the UN reached an agreement with MEK in December 2011 that would relocate Ashraf residents to Camp Liberty outside Baghdad, a "temporary transit station" from which group members could eventually be taken in by other countries. As of July 2012, the State Department reports that this transfer has stalled since the last relocation convoy left Ashraf in March.

The UN High Commission on Refugees is determining MEK members’ eligibility for refugee status, which would eventually set the stage for their resettlement outside Iraq. UN special representative for Iraq Martin Kobler has called on foreign governments to open their doors, but negotiations are still under way.

FTO Status
MEK was added to the U.S. State Department’s list of Foreign Terrorist Organizations in October 1997. Washington holds the group responsible for the deaths of several U.S. servicemen and civilians in Iran during the mid-1970s, as well as its alleged participation in the seizure of the U.S. Embassy during the 1979 revolution. Other terrorist activities cited by the State Department include MEK’s decades-worth of terror attacks on the Iranian regime, and the groups’ cooperation with Saddam Hussein in his crackdown on Iraqi Shia and Kurds in the early 1990s.

MEK has been trying to be removed from the FTO list for several years, officially renouncing terrorism in 2001. The group argues that its FTO status prevents it from legitimately participating in the Iranian opposition movement and points to the European Union and the UK’s decisions in the last five years to delist MEK as a terrorist group. In February 2012, Secretary of State Hillary Clinton said MEK’s compliance with the relocation to Camp Liberty would be a "key factor" in the decision whether to remove the FTO designation.
The Debate over Delisting
The debate over MEK’s FTO status has attracted both critics and supporters. In the National Interest, national security expert Raymond Tanter argues that "nothing is likely to be more decisive in reducing the strategic threat from Tehran than having a vigorous democratic opposition in Iran." The MEK, which he says should be a valuable component of this opposition, was designated an FTO by the Clinton administration as part of an effort to open dialogue with moderates in Tehran. Tanter writes that MEK should be delisted based on a lack of evidence of its terrorist activities since 2001.

Trita Parsi, an MEK critic and leader of the National Iranian American Council, says efforts by MEK and its supporters to frame the group as a legitimate Iranian opposition group are suspect. Their PR campaign is analogous to the now-discredited claims made by Ahmed Chalabi and the Iraqi National Congress (NYT) in the push for a U.S. overthrow of Saddam, Parsi says.

Others say that delisting MEK will unnecessarily damage U.S. relations with Tehran and harm Iran’s domestic democratic resistance, a movement that allegedly opposes MEK. Muhammad Sahimi of PBS’s Tehran Bureau told al-Jazeera: "Anyone who opposes the [Iranian government] and cares about Iran and democratic principles cannot do anything other than vehemently oppose the MEK." There is "no comparison with the non-violent Greens and the MEK," he said. Carnegie’s Sadjadpour concurs, noting MEK "is widely viewed as a backward and intolerant cult by their opposition peers in Iran."

Notably, the delisting debate seems to be hindering the relocation of MEK to Camp Liberty. Some U.S. backers of MEK have severely criticized the conditions at the new site. Former New York governor Rudolph Giuliani characterized the location as a "concentration camp" at an MEK-sponsored conference. The State Department condemns such attacks. Speaking to Foreign Policy, a U.S. official said "as delicate negotiations between the UN, the United States, the Iraqis, and the MEK continue, the role of these often paid advocates [on behalf of MEK] is becoming even more unhelpful and potentially dangerous." 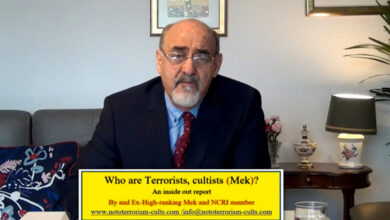