Through its political mission in Iraq, UNAMI, the United Nations has worked on many fronts to promote stability and reconciliation in the country, helping authorities there to organize landmark elections, draft development plans, improve relations with neighbors and promote national dialogue and compromise between communities.

One of its lesser known, though potentially life-saving contributions, could be UNAMI’s ongoing efforts at preventive diplomacy to avert bloodshed over the situation of Camp Ashraf, where a tense standoff has persisted between the government and an exiled Iranian opposition group.

For decades, the group known as the Mujahedin-e Khalq, or (MeK), occupied the Camp, a self-contained site only a few hours drive from Baghdad. Yet as Iraqi politics shifted dramatically following the fall of Saddam Hussein, so did the stance of the country’s authorities towards the group.

The current Iraqi government has made it clear that it wants Camp Ashraf shut down and the MeK – which once fought alongside Hussein and is designated by the United States as a terrorist organization – to leave Iraq. Baghdad sees its presence, in a place which is off-limits to the government, as an affront to national sovereignty.

When the Government announced late last-year that it would be closing the camp by 31 December, many feared a repeat of the violence of April 2011, when dozens of Ashraf residents were killed in clashes with Iraqi security forces at the camp. An earlier incident in 2009 cost the lives of at least 10 residents.

To prevent a similar outcome, the United Nations initiated intensive diplomatic efforts to find a peaceful solution to the crisis. UN Secretary-General Ban Ki-moon urged Prime Minister Nuri al-Maliki to extend the deadline for the camp’s closure, which he agreed to do. This provided time and space for a marathon exercise in preventive diplomacy led by Martin Kobler, the Secretary-General’s Special Representative for Iraq, who has mediated between the Iraqi government and the group.

“As an impartial actor the United Nations could interact with both parties,” Kobler said.

With support from other governments, including the United States, Kobler was able to bridge the gaps between the two actors and find an agreement that both respects Iraq’s sovereignty and provides the people of Camp Ashraf with a safe and voluntary path to a more hopeful life outside of Iraq. 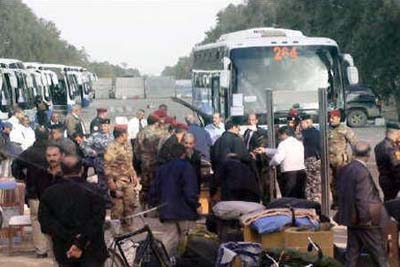 The final memorandum of understanding signed by the UN and the Iraqi government in late December 2011, takes the main concerns of both actors into account. Under its terms, Camp Ashraf will be shut down, its residents relocated voluntarily to a temporary transit location, Camp Hurriya, a former U.S. Marine base near the airport in Baghdad.

The government of Iraq has accepted full responsibility for the safety and security of the residents, from the relocation throughout their stay at Camp Hurriya. The accord provides that none will be returned forcibly to Iran or resettled in third countries against their will.
The challenge, to which UNAMI has put considerable effort, is to ensure the relocation of camp residents takes place without violence.

As a result of UNAMI’s diplomatic efforts, a first convoy of Camp Ashraf residents crossed the Iraqi desert on 17 February, carrying 400 people to their temporary homes in Camp Hurriya. By the end of June, a total of almost 2,000 persons, or two-thirds of the residents, had moved to the new location while an estimated 1,200 remained in the previous camp awaiting transfer. 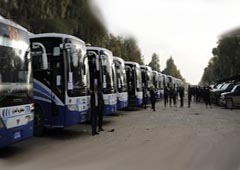 The moves carry long caravans of vehicles across dangerous territory, where roadside attacks have been common in the past, and involve complicated security and logistical preparations. UNAMI monitors the relocation process and provides round-the-clock human rights monitoring at Camp Hurriya.

Since the signing of the agreements, UNAMI has continued to mediate between the residents and the government to keep the process on track. This involves everything from high-level talks to keep the parties committed to the process, to the negotiation of practical and humanitarian problems of camp management.

“How much water the residents are allowed to consume per day, how the sewage and garbage systems are organized – these detailed and time-consuming negotiations all go through us, too,” Kobler says.

Resettlement Outside of Iraq

In the meantime, the UN Refugee Agency (UNHCR) has begun to determine the residents’ eligibility for refugee status, paving the way for a longer-term solution: their resettlement outside of Iraq.

“As Camp Hurriya is only a temporary solution, resettlement is the key to the success of this effort. There must be countries that are willing to accept Camp Ashraf residents after they obtain registered refugee status,“ says Kobler.

So far, however, commitments by governments to receive Ashraf residents have been limited. Kobler has been vocal in calling on states to seriously consider taking them in.

There has been no eruption of violence, to date, since the beginning of the process. Yet a slowdown in the relocation process during May and June prompted renewed tensions and recriminations, requiring renewed high-level diplomacy with the hope of resuming the process as soon as possible.

“The situation continues to be fragile,” says Kobler. “It is the responsibility of the Iraqi government and the camp residents to finalize the relocation in a peaceful and orderly way.”