In a letter to a British parliamentarian last month, a senior State Department official insisted that the United States was “doing its utmost” to ensure that Iraq’s government would treat 3,400 Iranian exiles living at Camp Ashraf in eastern Iraq “humanely.” Two weeks later, a clash 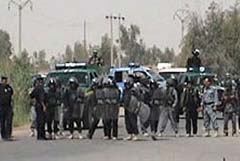 between the exiles and Iraqi police left 11 Iranians dead, and 36 were taken into custody by Iraqi forces.

Americans troops had guarded the camp since 2003, but recently handed over responsibility to Iraqi forces. Baghdad promised that the exiles would be protected.

There is no authoritative version of events, but it does not look as if that promise is being kept. The Iraqi government claims the exiles threw stones and Molotov cocktails when Iraqi forces entered the camp, ostensibly to establish a police post. The exiles have video showing Iraqi forces beating people with clubs and charging them with vehicles. The administration’s response has been weak. Officials say they will press Iraq to fulfill its promises but can only do so much now that Iraq is in charge.

The camp’s residents are members of the People’s Mujahedeen of Iran (MEK), which is committed to overthrowing Tehran’s government. Saddam Hussein welcomed them to Iraq during the Iraq-Iran war and they have lived at the camp ever since.

Iraq’s Shiite-dominated government now has good relations with Iran and little enthusiasm for the MEK. The Americans are at best ambivalent. The group, which some consider a cult, is on the American terrorism list for attacks against the United States (in the distant past) and more recently against Iran. In 2004, the United States — seeking to stabilize Iraq — recognized the camp’s residents as “protected persons” under the Fourth Geneva Convention, after they signed statements renouncing terrorism and gave up their weapons.

Residents say that Washington has now betrayed that commitment. They have a legitimate complaint. But the MEK has also made no effort to reduce tensions with the Iraqis.

The United States should not retake control of Camp Ashraf. But it must warn Prime Minister Nuri Kamal al-Maliki that it will more closely monitor how the exiles are treated. Iraq’s government must formally charge those arrested, give them a fair trial and take steps to avoid a repeat of last month’s bloodshed. If Iraq is determined to close the camp, Washington, Baghdad and the United Nations should develop a process.

Residents are barred from resettling in many third countries because of the group’s terrorist designation. Finding a solution will not be easy, but none of the exiles should be forcibly returned to Iran.