There is no way in which a compromise can be made with the Mujahedin-e Khalq and the closure of Camp Ashraf is a problem concerning Iraq’s territorial integrity, said Iraqi Prime 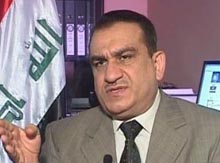 Referring to the final stages of the Mujahedin-e Khalq (MEK, a.k.a. MKO and PMOI) expulsion from Iraq, Ali al-Moussawi condemned as unacceptable MKO’s objections to the conditions at Camp Liberty, Habilian Association website reported on Sunday.

Al-Moussawi called on the western countries to accept the members of this notorious cult.

He went on to say that western countries’ refusal to accept MKO members in their countries contradicts their insistence on Iraq to observe human rights standards concerning them.

According to an agreement signed in December 2011 between Iraq and the UN Assistance Mission in Iraq, members of the terrorist group should be temporarily transferred from Camp Ashraf to a former U.S. military base, Camp Liberty, for the UNHCR to determine their refugee status.

To date, roughly two-thirds of the members of these people have been relocated to Camp Liberty in five groups of 400; however, some 1200 of them still remain at Ashraf under the pretext of “dire conditions” at the camp.

Earlier in July, Uday al-Khadran, Mayor of Khalis, warned of a possible explosion of Iraqi people’s wrath over the delay of the expulsion of remaining MKO members at Camp Ashraf.