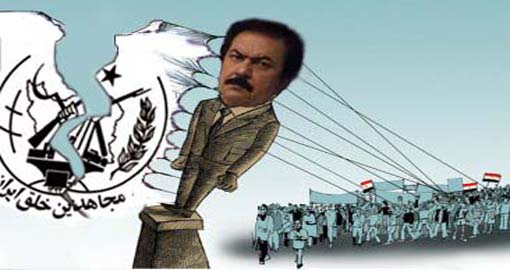 accept and shelter the MKO members, no country has yet agreed to let them on its soil as refugees. Labid al-Abawi, the Iraqi Deputy Foreign Minister has recently stressed that the Iraqi government has complied with all its undertakings to ensure the rapid expulsion of the terrorist MKO from its soil saying: “The group [MKO] is now in the transit Camp Liberty in Baghdad and the UN will start their transition as soon as a third country is found for them”.

MKO is not the Iraqi government’s sole serious problem to tackle with but one of the most complicated among many. Unrest, tribal insurgence and bombing are post Saddam legacies that have to be curbed. Based on official reports, Martin Kobler, the Special Representative of the United Nations Secretary-General for Iraq (SRSG), has strongly condemned the frequent wave of fomented unrests and bombings which have targeted thousands of individuals especially in northern and southern provinces. Expressing his concern, Mr. Kobler states that “I am particularly alarmed that attacks in disputed internal areas further aggravate the tensions there”.

The latest figures from UNHCR show that there are currently more than 70,000 Syrian refugees in Iraq, all fleeing the escalated violence in Syria to seek protection in Iraq. Majority of these refugees suffer from serious lack of basic living needs and the harsh living conditions and there is an ongoing joint cooperation to respond to the pending needs intensified in the camps particularly located in the sub-zero temperatures. Lack of healthcare services, clothing, inappropriate shelters to keep the cold off, the cold weather itself coupled with unhygienic conditions and more shortages have made displaced people vulnerable to a variety of diseases and have left them with no choice but to be engaged in a desperate struggle to survive.

Compared to these poor refuges, MKO’ members, if they insist to be recognized as refugees, are enjoying the convenience of living in an ideal location abundantly provided and left over by the US army. Any life-threatening shortage? Sometimes you cannot tell if MKO’s leaders are talking seriously or just kidding. For instance, they complain why they have to suffer walking on the mud-laden ground at the rainfall or, as they have recently accused Iraqi forces, be deprived of using forklift trucks because “moving of loads by residents during this period of time has led to orthopedic diseases, acute pains in the limbs and backs, and irreparable osteo-lesions”.

In a recent demand pressed by the NCR Secretariat, which MKO claimed to be an effort to end inhuman restrictions in Camp Liberty, the group called on “the United Nations and the US government with specific responsibility towards safety and security of Camp Liberty residents to adopt urgent measures to end torture of residents and inhumane restrictions on them such as depriving them of their own forklift trucks, and also to remove the aforementioned officers from Camp Liberty”. One may ask what the loads are, how heavy and abundant they are and where they have come from to need forklift trucks to carry and stockpile them in a transit camp!

The call comes after the disappointed news that the Iraqi government refused the demand made by MKO to return to the old location they had occupied for more than 25 years calling it City of Ashraf. Asserted by the Chairman of the Commission on Security and Defence and Parliamentary leader of the Coalition of State Law, Hassan al-Sanid, MKO will not return to Camp Ashraf in Diyala province after having been transferred to Camp Liberty near Baghdad. He further notified that “the Iraqi government, in coordination with the United Nations Assistance Mission for Iraq (UNAMI), will act speedily on the mutually agreed resolution to drive them out.”

Besides ceaseless complains and new demands as well as spreading unfounded rumors of a massacre threat by Iraqi forces, MKO denounces the Iraqi government for plotting to plunder “the residents’ property and expropriation of their property, without paying any compensation”. Not only the government but also Mr. Kobler is accused of cooperating to pave “the way for stealing Ashraf resident’s property and third massacre in Ashraf by Al-Maliki at behest of the Iranian regime.

The Iraqi government has so far tolerated the cantankerous, strange behaviors of an imposed remnant of the ousted dictator. Neither are they refugees nor prisoners of war waiting repatriation nor trusted temporary settlers to grant them limited autonomous, self-dependent living. It is just a heavy, unthankful burden provided with free, double rations whose potential threats have to be drastically curbed until they are transferred out of the country. How long more can the Iraqi government tolerate the impudence of the guests who have outstayed their welcome is a question that remains unanswered.