The raid on Camp Ashraf on September 1st that resulted in the killing of 52 residents is a matter of concern and sorrow.

To probe the situation and the main causes of such an incident, it is crucial to review the mutual quadra 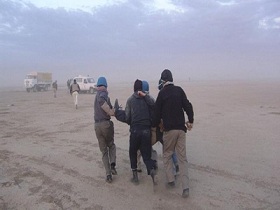 agreement signed by the American and Iraqi governments, the United Nations and the Mujahedin Khalq Organization ( MKO).

The relocation of about 3000 members of the MKO to Camp Liberty – while 100 members remained in Ashraf – was part of the process to expel the group out of Iraqi territory. The Iraqi government was responsible to ensure the security and safety of the MKO forces for a specific period of time, until they would be transferred to Iran or third countries.

However, the strategic aim for the leader of the MEK cult, Massoud Rajavi was to return to Ashraf and to reinstall his entire forces there after sometime. For Rajavi Camp Ashraf had turned into a strategic notion or even an ideological one.

Actually the evacuation of Camp Liberty depends on third countries’ willingness to accept them. Third countries have not welcomed such a plan and so far a few numbers of residents have managed to move to Albania and Germany. Obviously, the cult leaders have never been willing to let members leave the MKO in groups or individually (in absence of the cult’s regulations and influence).

On the other hand, the MKO had to leave Iraqi territory up to December 2011, regarding numerous warnings by the Iraqi government and rulings of the Iraqi courts and also according to the MOU signed between the MKO and the UN.

The case of the MKO forces in Iraq got very complicated because the group leaders want to maintain Camp Ashraf. They make a number of members stay there under the pretext of taking care of and selling the group properties in an unlimited period.

Due to the disorders taking over the entire Iraqi soil, the Iraqi government has not obtained complete control over insecurities. Considering previous attacks on the group’s camps, the MKO leaders were well aware that sooner or later their camps would be attacked again. If the MKO leaders cared about the safety and security of their members, they wouldn’t ask them to defend to the death Camp Ashraf so members could leave the camp and disperse. In fact, Massoud Rajavi is responsible for the killing on his forces. Iraqi government has the right to abstain from keeping them in their territory although it has to provide safety and security for the residents of Ashraf and Liberty.

In photos released on Camp Ashraf incidents, dead bodies are shown, shot in the head and handcuffed behind their backs. Regarding the fact that dead bodies and photographs both belong to the MKO, itself, the reality cannot be simply verified. Nejat Society is not pleased with victimization of the imprisoned members of the MKO who are abused by Massoud Rajavi’s evil manipulative system and his ill-minded ambitions. The victims of the MKO are not able to realize the conditions they are stuck in so they can not liberate themselves from the bars of this horrible, criminal cult.

The residents of Camp Liberty should be able to choose their future path with their own free will. They should admit that the “Cult of Rajavi” has no right to stay in Iraq.

Iraqi government is also responsible to investigate the case and find the perpetrators of the attack to be brought to justice.