A recently published document from inside the Mujahedin-e Khalq proves that Massoud Rajavi has used the most horrific tactics to suppress dissident members. Former child soldiers of the MEK revealed the cover and some pages of a pamphlet that demonstrates how critics against the MEK’s strategy will end with imprisonment, torture, elimination and even murder of the criticizing person.

The pamphlet which is titled “Organizational Ideological Argument” is actually the abstract of thousands of manipulation sessions run by Massoud and Maryam Rajavi in Camp Bagherzadeh, Iraq in 2001. The heart-breaking memoir of these sessions are always part of the difficult experiences of every former member of MEK. All of the confirm the content of the recently published document. According to the contents of this booklet, the MEK leaders forbid any kind of dissent and criticism in their cult-like organization. 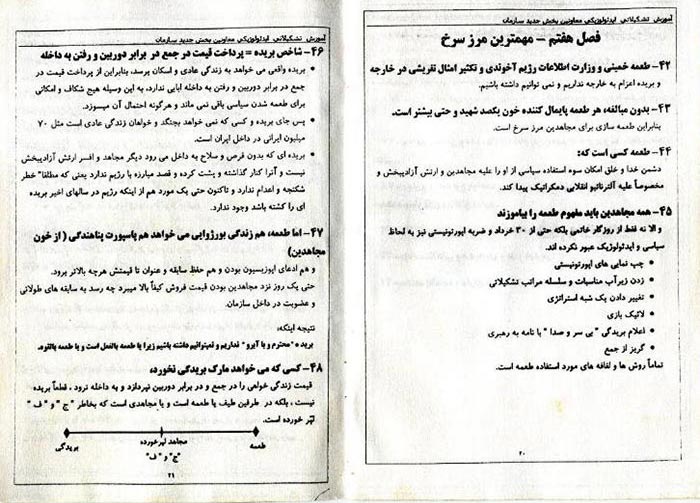 Zhina and Amir, the two former child soldiers of the MEK published two pages of the document that contains a dozen of guidelines to push the dissident members to the hands of the Iranian Government or the Saddam Hussein’s Intelligence Service (Estekhbarat). The document which is dated September 2001, clearly argues that defection is forbidden:

“There is no such a person as defector. A defector who wants to leave the organization to enjoy a normal life should confess in front of the cameras. His place is not in the organization; he will be sent to Iran without cyanide capsule and arm.” This way, the MEK leaders plan to threaten their dissident members that they will certainly be arrested and executed by Iranian government and the group actually pushes them to this dark fate.
According to the document, no dissident member is allowed to go to Europe to take refuge. Instead, he or she will be handed to the then Iraqi government that was called by the MEK as the landlord.

“If we do not smuggle the defector into Iran, we will hand him to the landlord who will deal with him in accordance with their laws. Explanation: unlike European countries, Iraqi government does not deal with individuals and does not grant refuge. Iraq deals with the organization as a whole. It has accepted members based on the organization’s credit. Therefore, people who are attached with the organization are not questioned and do not have to fill out forms while arriving or leaving the country. Consequently, once the organization does not admit the responsibility of an individual, he will be treated as an illegal person.”

The content of this document is nothing new for former members of the MEK. We have already seen the testimonies of numerous defectors of the group who were victims of such a horrific punishment by the Cult of Rajavi. However, this booklet can be considered as a legal document to prove the inhumane attitude of the MEK leaders towards their own members in order to bring them to justice in a fair international trial.