Terrorism is an intentional act of violence which causes fear in the target audience or society; it’s a political act, the goal of which is to make a change. The terrorist is not driven by personal desires or 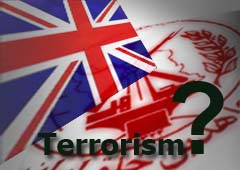 Assuming that the MKO is not engaged in acts of violence any more, precautionary steps should be taken when dealing with this cult because of its past violence. In the late October, the British Secretary of State for the Home Department was asked by the UK Parliament member Menzier Campbell about the current immigration status of the 52 Liberty residents who are seeking resettlement in the UK. The answer was that none of the 52 residents of Camp Ashraf and Camp Liberty who were previously settled in the UK have any current immigration status in the UK. He said," We have agreed to consider, exceptionally, their re-admission as refugees, subject to a UN High Commissioner for Refugees (UNHCR) assessment of each individual to ensure that none have been complicit in acts of terrorism or other activities incompatible with refugee status."[1] No decision has yet been made on the status of the 17 MKO members whose assessments have been submitted to the Home Office, according to Mark Harper. Similar to most European countries the UK seems to be unwilling to receive members of this cult.

Chris McGreal of the Guardian concludes in his article on the MKO as a sponsored terror group that the group has not changed at all . ”It has certainly abandoned violence, at least for now,” writes Mc Greal. “But that is in part because it was forcibly disarmed by the US army in Iraq.” The Guardian correspondent describes the MKO as “far from democratic” referring to the US State Department report on the group. "It is autocratically run by a husband and wife, Masud and Maryam Rajavi, who the state department say have “fostered a cult of personality”, Mc Greal states. [2]

In November 2007 the Proscribed Organizations Appeal commission (POAC) ruled that the British government’s decision to keep the MKO in the list of terrorist organizations was” perverse” and must be set aside. The ruling was backed by a number of well-paid parliament members. However, the UK government argued that the MKO had only temporarily ceased terrorism for “pragmatic reasons”. [3]

A Home Office spokesman told the Guardian in February 2008,”We believe there is a risk of the PMOI returning to terrorism in the future that warrants its continuing proscription in this country”.[4] Nonetheless, the United Kingdom was the first country to delist the MKO in 2008. The move was denounced by many peace activists and journalists who warned about the risk of supporting a terror cult with a track record of violence and cult-like practices. In 2011, the US was going on the same path the UK had gone: delisting the MKO. A Large number of former US high profiles were running the MKO’s lobby in the Congress in order to remove it from the FTO list. A guardian piece authored by Matthew Partridge was published under the title "Britain and America should beware supporting the Mujahideen-e- Khalq”. [5]

Partridge notifies the MKO’s unpredictable behavior as an opportunist organization:"Ironically, before its split with Ayatollah Khomeini, its leaders worked closely with Iran’s theocratic government, directly participating in the 1979 takeover of the US embassy in Tehran. This raises the obvious risk that if Britain and America covertly, or overtly, supports MEK, it could then cut a deal with Tehran and turn its guns on Europe and America." [6] Although Partridge assertion is not precisely accurate – Iranian nation will never forget the MKO’s atrocities and treasons against its own country fellowmen so no deal will be reached – the warning about the MKO’s substance is truly stated.

Today the UK is now authentically facing the risk of receiving a number of fanatic cult members with dark background in violence. It seems that the UK’s decision to delist the MKO in 2008 was a political act – whether to put pressure on Islamic Republic or to appease the enemy of UK’s enemy. However, the danger that is facing now cannot be ignored. Today, the safety and security of British citizens matter. An example of such a risk took place, in June 2003, after the arrest of Maryam Rajavi by the French Police. Radical behavior of cult followers who set themselves on fire in European capitals to protest their leader’s arrest, illustrated an image of the undemocratic, extremist nature of the MKO.

Moreover, the residents of camp Liberty who are held as hostages by the group officials have no way out except to be checked and received by third countries. The UK Government that is acting so cautiously to admit 17 people should have been more cautious when it first lifted ban on the group. This coin has two sides. A terrorist cult of personality does jeopardize both friends and enemies.

[1]UK Parliament, Britain may admit 17 Liberty residents with no links to terrorism, October 30, 2013

[2]Mc Greal, Chris, Q&A what is the MEK and why did the US call it a terrorist organization? The Guardian, September21, 2012

[5] Partridge, Matthew, Britain and America should beware supporting the Mujahiddin-e-Khalq, the Guardian, January9, 2011