Members and representatives of Setaregan Association (Switzerland), gathered in Geneva for the 27th Session of the UN Human Rights Council (UNHRC). The Association used leaflets and individual explanations to inform delegates to the Conference about the human rights abuses practiced by the Rajavis against members of their own organisation, the Mojahedin Khalq. Representatives of Setaregan, including Nasrin Ebrahimi, were able to relate personal testimony to inform delegates, a move which was highly effective. 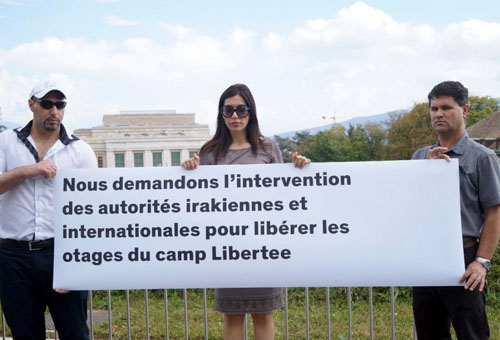 Setaregan exposed the deceptive behaviour of the MEK. In particular they alerted delegates and officials at the UN to the presence of an individual by the name of Behzad Naziri, who is posing as a human rights activist for a bogus NGO. Naziri is actually a high ranking member of the MEK who is wanted in Iraq for committing war crimes and crimes against humanity there while he served as a high level MEK military commander, as an adjunct to the Saddam regime’s suppressive apparatus. Many former MEK members now living in Europe have personal experience of Naziri’s torture and mistreatment in the MEKs Iraqi camps.

Of particular concern was the mistreatment of women inside the MEK as well as the continued refusal of Maryam Rajavi to free the hostages in Camp Liberty in Iraq.

Members of the Association also gave evidence of the MEK’s support for ISIS and asked for an investigation into activities at the MEK’s headquarters in France and the role of Maryam Rajavi in supporting terrorism and extremism in Iraq and Syria.

Setaregan Association handed over a letter to officials at the HRC explaining these facts. This is produced below: 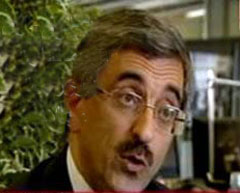 At the start of the 27th Session of the Human Rights Council in Geneva, an agent of the Rajavi cult (Mojahedin Khalq, aka MKO, MEK, PMOI, NCRI), by the name of BEHZAD NAZIRI, has been dispatched to Geneva. Hiding behind the respectable guise of a suit and tie he pretends to belong to various NGOs to infiltrate his way into the buildings and meeting rooms. He is pretending to be a freedom lover and supporter of the rights of the people of Iran but in reality he is carrying out the direct orders of the Mojahedin Khalq (Rajavi cult).

Since the true nature of the Rajavi cult (aka Saddam’s Private Army) is known to all the human rights activists and organisations, the cult does not dare to use its real name to register or to enter meeting rooms. Hence it resorts to using its infamous agents like BEHZAD NAZIRI in disguise to do their job of lobbying by deception, lies and fabricated documents (which the MEK are famous for).

1- BEHZAD NAZIRI, who now hides his membership of the Mojahedin Khalq Organisation, is the same person who served in military uniform in Camp Ashraf as a commander of Saddam’s Private Army during the reign of Saddam Hussein’s dictatorship.

2- BEHZAD NAZIRI is one of the closest commanders to Massoud Rajavi (the cult leader), who was deeply involved in the massacre of the Kurdish population of Iraq. Massoud Rajavi, whose existence was totally dependent on the existence of Saddam Hussein, participated fully in the suppression of the uprising of the Iraqi people, and BEHZAD NAZIRI was one of Rajavi’s military commanders who carried out his orders to commit crimes against humanity and war crimes.

3- Human rights organisation have repeatedly reported in detail the suppression of members of the Rajavi cult by their leaders over several decades and all agree that the human rights abuses inside the organisation have never stopped. Rajavi used these inhuman tactics to force the trapped members to carry out orders against their personal beliefs and will. BEHZAD NAZIRI has been and is one of these suppressors and commanders of the Mojahedin Khalq.

The one who has put on military clothes and sits in a tank to murder masses of civilian Iraqi Kurds only to extend the reign of a dictator like Saddam, and the one who has been engaged in the imprisonment, torture and execution of the internal critics of the Mojahedin Khalq terrorist organisation and the one who is now working in support of ISIS in the heart of Europe is not a “Freedom Lover” nor is he a “Supporter of the rights of people of Iran”.

BEHZAD NAZIRI, hiding behind the mask of “the people of Iran and freedom”, has been sent to push the MEK and Rajavi’s agenda. The leader of the cult is determined to keep its members (now mostly disaffected) in Iraq (currently in Camp Liberty), for as long as possible . His hope is that the victory of the ISIL against the government of Iraq will allow the cult to keep these people in Iraq and use them as he used them during the era of Saddam. BEHZAD NAZIRI has been, and remains, one of the key players in misinforming people that they are working for the human rights of the trapped people of Camp Liberty, when the real agenda is not to save them but to keep them there indefinitely.

We ask all the Human Rights organisations, ICRC, UNCHR and others, to stop BEHZAD NAZIRI as the main agent of the Mojahedin Khalq and the head of the group of agents who are now trying to push for the agenda of Massoud Rajavi (a fugitive since the fall of his benefactor Saddam Hussein), from entering meeting rooms, and not to fall into the trap of the disguise of a human rights abuser as a human rights activist. We ask these people and organisations to work to help free the trapped hostages of Rajavi’s cult (MEK) in Camp Liberty and facilitate their transfer to other countries, and we ask European countries to accept as many as they can in this respect. It is a documented fact that the leadership of this organisation is the main problem in creating obstacles to resolving this situation. Hence we ask you to open the closed gates of this camp to the families and loved ones of these hostages and to facilitate simple meetings between these families, some of whom have not seen one another for decades.

Open Letter to Dr. Alejo Vidal-Quadras on his support of MKO