Ebrahim Khodabandeh: I was manipulated to tell lies

Ebrahim Khodabandeh the famous former member of the Mujahedin Khalq Organization (the MKO) was arrested by the Syrian officials, in 2003. He was serving for the international relations committee of the MKO. After his arrest in Syria he was submitted to the Iranian government 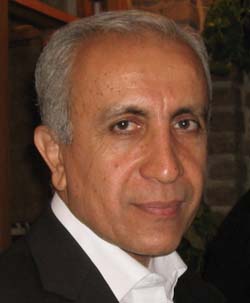 In Iran, he was imprisoned in Evin prison where he began studying about cults. Khodabandeh has so far published articles and translated books and articles on the threat of destructive cults, particularly the MKO.

Esharat, an Iran-based journal is one of the numerous media that have interviewed him up to now. The following includes parts of the interview translated by Nejat Society.

–  Having been motivated by Islamic and anti-imperialistic ideas you joined the MKO but practically you observed another face of the group. As you stated you yourself used to work hard to portrait a secular pro-Western image of the group for your Western audience, wasn’t it provocative for you?

Good question! Yes, I have witnessed a 180-degree turn in the MKO’s positions and interests since the Islamic Revolution. For example, Rajavi who once offered gifts to Yaser Arafat and said that the only way to liberate the Palestinian nation is the armed struggle against Israel, today is proud of the Israeli company for his group.

… Cults have no unchangeable principal; they have only one fixed principal and that is: Everything must go around the leader’s interests and will. Maryam Rajavi told us:” You are not good enough unless you recognize Massoud’s interests and will and then you try to fulfill them”…

–  Does it mean that you officially told lies and deceived people?

In cults, lying and deceiving is formulated and indoctrinated by the system. Everything is based on lie and deception. The hierarchy tells lies from top to bottom.

I was deceived by the MKO so I was recruited by it. Then I was brainwashed under the mind-control system. I was manipulated to tell lies about the group’s cause as if it was a secular pro-western organization…

When you are a member of a destructive mind-control cult, you have no fixed and stable beliefs and thoughts. You are just asked to obey the absolute power of the leader. In a community where everyone thinks the same, in fact nobody thinks. The leaders thinks instead of everyone.

–  Didn’t you find it paradoxical or contradictory? For example, you joined the group with your anti-imperialistic ideas to fight the US, and now the MKO was acting the opposite?

Of course, Yes. I was faced with contradictions. Other members also had paradoxes in their minds but the cults have trickeries to encounter such contradictions that occur every day. Contradiction means that the data you were given does not seem logic. However, your contradiction would not be solved by debate or arguments but it was faced with psychological techniques or in better words, with peer pressure and mental suppression. Once you enter a destructive mind control cult, you are kept and controlled by psychological techniques.

–  If you were not arrested in Syria, would you stay in the MKO until now? And, didn’t you try to swallow a cyanide capsule after you were arrested?

Yes, I would have definitely been in the Cult of Rajavi in ignorance and under the mind-control manipulative system of the cult. I would have no way out to salvation…

In my mission to Syria, I didn’t have cyanide capsule. If I had one, I would eat it because being arrested alive and yeilded to the Iranian government was our red line.

–  Do you really believe in the term salvation for your separation from the MKO?

Yes, exactly. Being released from the hands of a destructive mind control cult is in no way simple. This is possible if you are supported from outside of the cult, for example if you are aided by your family. That’s why the cult leaders forbid and control any contact with families.

–  What happened in Evin prison that your beliefs and thoughts changed?

I should notify that members of mind-control destructive cults have no determined ideas. They are dedicated to their leader. Massoud Rajavi was officially presented as the ideological leader. Our ideas were those of Massoud’s. If he changed his words every day we would change our words every day. Cults do not practice ideologies; they do practice psychological methodologies that control people’s minds…

When I arrived in Evin prison, I still saw myself as a devoted Mujahed-e Khalq under the order of Massoud Rajavi . I was ready for torture and execution but gradually I was faced with reality. I thought about the attitudes and interests of the cult of Rajavi so I increasingly faced contradictions. I simply found that I was not able to defend the MKO’s approaches even in my own mind. Logically I had no point to defend Massoud Rajavi whom I used to worship …

About a year later, I started reading the book “Cults in our Midst” of Mrs. Margaret Tahler Singer. My brother Massoud Khodabandeh had sent it to me from England. It should be said that in the prison, I tried to keep myself behind the boundaries I allegedly had with the Islamic Republic. Even I did not want to read the Iranian books, newspapers and I avoided watching Iranian TV.

The book had nothing with the Iranian government nor the MKO but I was really moved by the book. Although, the writer had no idea of the MKO, the similarities between the MKO and the cults in the United States were so significant that you would think it was written about the MKO … For the first time after so many years, I let myself think freely and independently. Of-course, getting to this turning point took me two years in the prison.

–  Suppose that you are told that you submitted to the Islamic Republic and turned against the organization you embraced for 23 years due to the pressure of imprisonment or the risk of execution or for the sake your suffering mother, what is your answer?

This question seems rational. In response, I should say that one may regret his past or repent of his past under pressure, one may give information about his past organization and condemn it under pressure of the imprisonment but he is not able to argue, discuss and prove his arguments. All I say about the MKO is based on scientific arguments and reasons that are confirmed by other defectors of the cult. I am ready to argue it with everyone everywhere to prove that the most basic human rights are being violated in the Cult of Rajavi. The cult uses destructive fraudulent manipulation techniques to control members’ minds. It is not what it pretends.

It is not hung up to any principals. This is all I have said to this point. If a force wants to fight the Islamic Republic it doesn’t have the right to abuse its own members and to mentally suppress them…

–  Suppose that you are accused of having been brainwashed in Evin prison! What do you say?

I was liberated from the Cult of Rajavi over 12 years ago. During these years, I have been far from the atmosphere of the Cult and its indoctrination sessions and cult jargons. I have been studying the phenomenon known as “the threat of the third millennium”: Destructive Mind Control Cults. I have studied and translated and authored a lot of books and articles. In her book titled “Brainwashing”, Ms. Kathlyn Taylor specifically suggests that the main condition to become the target for brainwashing is to be unaware of its techniques. The MKO never permitted me to read something freely but in the Evin prison I read books. Regarding my studies and the information I got, there is no possibility to brainwash me now because I’m well aware of the techniques and tricks ….

Thus, it is very important to know about functions of destructive mind control cults…

Corrupt Money circulating between the MKO and Iraqi parties

UANI, Joe Lieberman and the MEK