After Interior Minister Fatmir Xhafaj, Iranian Mostafa Mohammadi has also written to Prime Minister Rama, saying he wants his daughter released. According to him, she is held hostage by Mojahedin at the Manza camp in Durrës

shqiptarja.com and Report TV ‘s editorial board have secured another exclusive letter sent by the Iranian father of 38-year-old Somayeh Mohammadi, Mostafa Mohammadi, to the highest state office. After Interior Minister Fatmir Xhafaj, Mohammadi has also written to Prime Minister Rama, saying he wants his daughter released. The letter is addressed Mr. Agron Soyat, the prime minister’s adviser on anti-terrorism.

Mostafa says he is a Canadian citizen and that the MEK organization in Manzas of Durres has held his daughter hostage for 21 years. He even says he was assaulted by members of this organization on July 27, 2018. According to him, about 50 mujahideen that same day surrounded the police station no. 4, as well as terrorizing lawyers and police in the region and calling him and his wife terrorists.

“I believe you have seen in the media how the Mojahedin beat me on July 27, 2018 near the madrasa in Tirana. Mojahed Humayun Deyhim, a person who has committed crimes in Iraq, stopped me on the street and together with 7 other Mojahedin, pushed me, struck me and then called me a terrorist, and as a result of this assault I ended up in the hospital. Then when we went to police station No. 4, the Mojahedin commanders, consisting Behzad Saffari, Jila Deyhim and Ahmad Taba (persons who committed crimes in Iraq) with around 50 Mojahedin surrounded police station No. 4 and terrorized lawyers and police in the region and called us terrorists”, he says.

The Iranian also mentions the case of British Channel 4 journalists headed by Mrs Lindsey Hilsum who says she has interviewed him about this issue.

“In a few days they labelled as Iranian agents two journalists, one from the British newspaper The Guardian, who were not given access inside their camp to see Somayeh. The violent behavior of the Mojahedin against journalists and the parents of the persons they hold hostage in their organization not new. They firebombed the Mansur hotel in Baghdad, Iraq, in 2006, when I wanted to meet my daughter and have sent a killer to kill me. I am alive thanks to US Marines who rescued me in Iraq. These facts are shown in the documentary I produced for my daughter which is here: https://www.youtube.com/watch?v=hjYLhpB9Xyg, “he explains in the letter

On the other hand, a short time ago his daughter Ms. Sommyeh Mohammadi, personally went to Manza police station to file a lawsuit against him. Earlier, Somayeh wrote a letter to the Interior Minister of Albania, in which she explains that her father is in this country with a mission on behalf of the Iranian Intelligence Ministry. 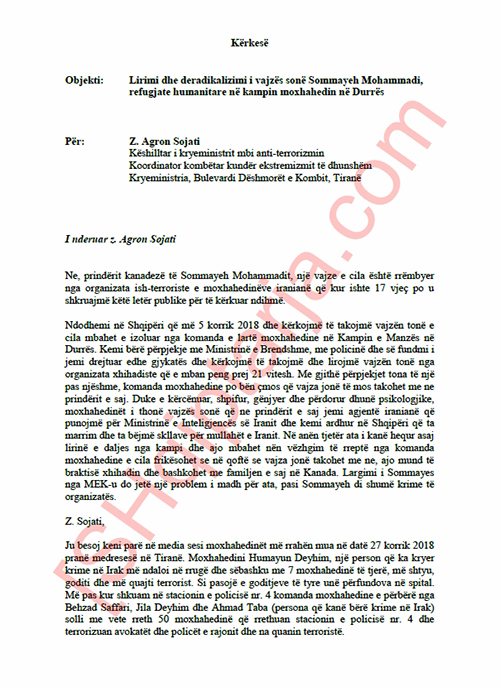 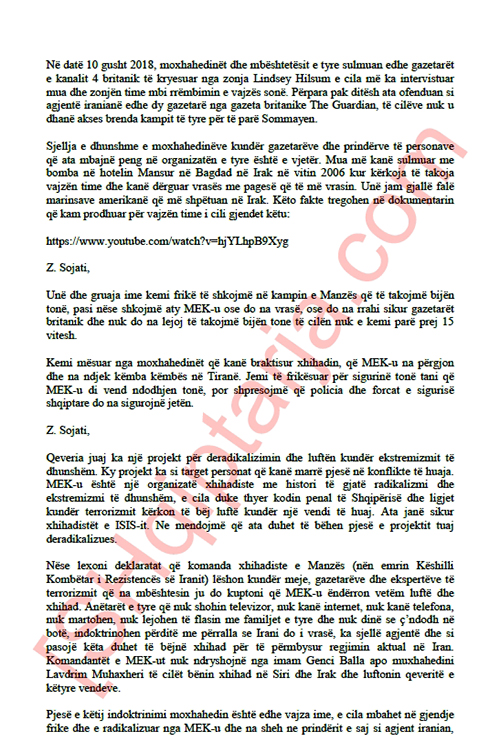 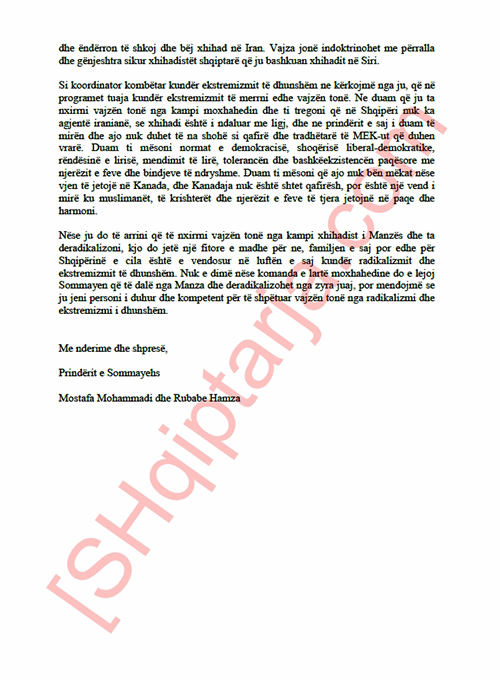