To: Secretary General of Amnesty International Mr. Kumi Naidoo
Amnesty International UK
Human Rights Action Centre
17-25 New Inn Yard
London
EC2A 3EA
020 7033 1777
sct@amnesty.org.uk
We write as the families of Mojahedin Khalq members. We do not wish to comment on the events of 1988 that your report covers except to question whether it is customary for a campaigning human rights group to investigate historic events in a 140-page report. What does AI hope to achieve by creating this report? 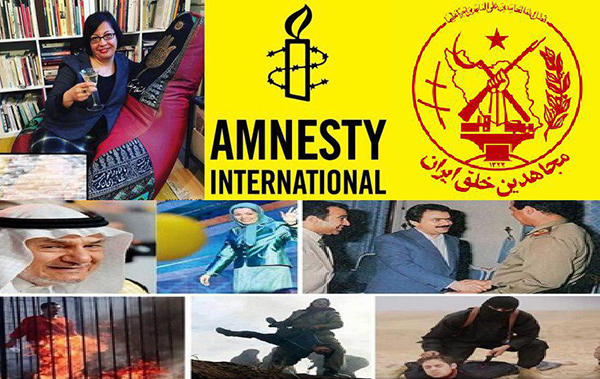 We find the report seriously flawed and it lacks credibility for the following reasons:
An internet search will show that all western organisations, such as the US State Department and United Nations, and the media refer to the Mojahedin-e Khalq organisation as MEK or MKO. This report refers throughout to the PMOI, which is only ever used by the MEK itself. After reading this report we need to ask who has really written it and what relationship the author has with the MEK/MKO and Maryam Rajavi?
On page 7 of the report it says:
“Amnesty International’s research, conducted from September 2017 to November 2018, analysed the testimonies of 41 survivors, 53 family members of victims, 11 former prisoners, and 10 other witnesses from 28 cities across Iran, obtained either directly or through Justice for Iran, an Iranian human rights organization.”
Shadi Sadr of Justice4Iran is the nominal head of several organisations supported by anti-Iran neoconservatives. She frequently travels to Albania and Paris to liaison with MEK and Maryam Rajavi. She has written pro-MEK articles and takes a pro-MEK stance. She has no credibility whatsoever in the wider Iranian community.
The report claims to have taken testimony from MEK members in Albania. The people in Albania do not have identity documents, work permits or travel documents. They are not registered as refugees in Albania. Even when they were registered by the UNHCR in Iraq many used fake or borrowed passports. So, it would not be possible for AI to accurately and unequivocally identify the individuals they spoke to.
Also, it is true that all MEK members have already learned scripted information about the events of 1988. MEK have indoctrinated the members with their version of reality over the years. They are not reliable witnesses.
There are tens of Iranian families living in Europe and North America who lost their loved ones in the events of 1988. The report is an insult to the other families of the executed people inside and outside Iran who do not support the MEK, who have not sided with Saddam Hussein nor with Saudi/Israeli anti-Iran forces. Why has AI failed to interview even a single one of these people? They are families of MEK victims, but they are not traitors.
On page 1, Amnesty International claims to be “independent of any government, political ideology, economic interest or religion and are funded mainly by our membership and public donations”.
After the fall of Saddam Hussein when it was possible to investigate the conditions of MEK members in Iraq, AI failed to say a single word except to promote MEK as a ‘human rights’ group. In 2005, Human Rights Watch wrote a damning report on the human rights abuses conducted by MEK against their own members. In 2009 the RAND Corporation conducted an in-depth study of MEK and revealed its cultic human rights abuses. This year alone, following some hard-hitting reports by Albanian media about MEK’s dangerous and abusive behaviour in Albania, various western media outlets investigated and wrote about MEK. All identified serious human rights abuses against the members.

As families of the MEK members we are angry and appalled that Shadi Sadr can go to Camp Ashraf 3 in Manez, but none of us families are allowed to visit our loved ones there. We have campaigned for two decades for the right to have contact with our loved ones inside the MEK. Even prisoners in high security jails in Iran have this right.

Raha Bahreini of AI and Shadi Sadr of Justice4Iran have made the MEK out to be a peaceful democratic opposition. This is a lie.
MEK members are isolated and held in a state of modern slavery under forced indoctrination. Apparently Amnesty International does not know the meaning of that. Otherwise, why doesn’t AI speak out about the current abuses of the MEK? Why doesn’t AI mention anywhere that MEK kills its own members – Massoud Dalili in Iraq and Malek Sharai in Albania this year for example?
Your report frequently refers to the right of victims and their families to have human rights abuses investigated and reparations made. While the report identifies members of the Mojahedin Khalq as victims in 1988, you have ignored the victims of human rights abuses inside the MEK for over thirty years. The report even fails to mention what happened during Operation Eternal Light in 1988 when Maryam Rajavi and her husband Massoud sent 2000-3000 members – mostly non-combatants – to their deaths in a hopeless military campaign to invade Iran. This was clearly a war crime.
This complete – and we can only assume, deliberate – failure to describe the MEK’s crimes and abuses in the report make it meaningless. Its only use could be for the MEK to whitewash its image and deflect attention from the control and abuse of their members in Albania.
If Amnesty International truly believes in campaigning for every person’s human rights, we families make the following demands:

That AI pressure the Albanian state to ensure that all who want to leave the MEK camp are allowed to do so.
To ensure that the Albanian state issues visas and intervenes inside Albania to allow families to meet their loved ones.
To grant the members and ex-members of MEK identity documents and work permits which will allow them to live independently.