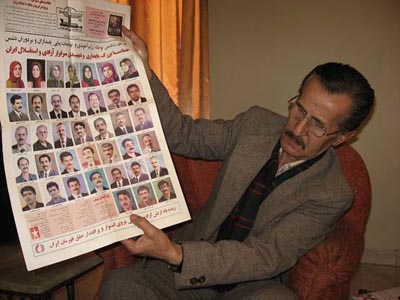 Honourable Judicial Authority of the Republic of Iraq,

My name is Teymur Kattar. I was born in 1948 in the city of Hamadan in Iran and at the moment I live in the city of Karaj in the province of Tehran. My wife and I wish to appeal to the Iraqi security and judicial authorities to deal with the case of the suspicious death of our son Soheyl Kattar in the base of the Mojahedin-e Khalq Organisation (MKO) in Iraq called Camp Ashraf.

It is worth mentioning that Sohey Khattar left Iran legally with his Iranian passport along with my nephew Mehran Rastegar to go to Turkey to eventually go to Europe for employment. One week or ten days after their departure, my brother Manuchehr Kattar who lives in Holland contacted them and offered them a chance to go to some place to learn the language first and then move to Holland to join their uncle. But contrary to his promises they ended up in Camp Ashraf the base of the MKO in Iraq, a place which is quite hard to leave.

I was unaware of their situation for about four months until they called and told me that they are well and are busy training. We were relieved to learn that. They did not mention anything about going to Iraq and Camp Ashraf. Then they sent some letters and photographs which were posted from Europe. As I learned later my son had quarrels with the MKO officials and had asked them that he was supposed to go to Europe but now he remains in Iraq. He had even told them that he would escape from Camp Ashraf any time he finds the chance. I learned about all these through those who parted from the MKO and came back to Iran. He was even once put in solitary confinement for 48 hours just for opposing the MKO.

We had no further news from them until my brother Manuchehr called me from Holland and informed me that Soheyl was killed in a border clash four months earlier. I was quite suspicious about the reason of his death.

My wife and I along with one of our relatives went to Iraq and Camp Ashraf on the beginning of 2004. They told us a different story. While they had published my son’s picture in their publication and claimed that he was killed during the bombings of Iraq, they told us that he was killed when cleaning his gun by an undesired shot under his chin.

We had gone to Iraq and Champ Ashraf to claim for the body and belongings of our son which they never let us have them and eventually we left there with frustrations. They did not even show us a picture of his body or a picture of his funeral. Someone there who I prefer not to reveal his name for security reasons (if I am assured that the person would be taken out of the MKO control I would give the name to the relevant authorities) informed me covertly that our son Soheyl was killed by the MKO since he was discontented and restless and he wanted to part from the them. This person told me that the story of undesired shot is false. Apparently our son Soheyl was eliminated because he was opposing the organisation.

My nephew Mehran Rastegar, who had left Iran along with my son and escaped later from Camp Ashraf and returned to Iran, told me the whole story from the beginning and said that they were taken to Dubai for a few days first and then to Iraq. When he returned to Iran he was suffering from psychological disorders and was completely depressed. He told us that he was continuously under mental and physical pressure in Camp Ashraf. He died two years later at the age of 25 due to heart stroke caused by all he had gone through in the MKO. Soheyl was 20 when he left Iran and was killed when he was 22.

While in Iraq, once a well build commander called Asad approached us and told us that apparently Soheyl had committed suicide. Then he said that Soheyl enjoyed high moral and was very cheerful. I asked him how a cheerful person with a high moral commits suicide. Later I found out that a girl called Alan Mohammadi was also killed exactly the same way. She was shot under her chin and they claimed that it was an undesired shot or perhaps committing suicide.

Hessam Shakeri and Bizhan Rezavandi from Karaj are amongst those who had escaped from Camp Ashraf and returned to Iran and they know about our son Soheyl Kattar. They say that Soheyl was killed by the MKO.

Now which story is true? Was he killed in a border clash by the Iranian guards as my brother told me? Was he killed under the US and its allies’ bombings as published in Mojahed weekly publication? Was he killed because of an undesired shot as we were told by the officials in Camp Ashraf? Or did he commit suicide as a commander mentioned? I would say none of these stories are right and they fabricate these lies to cover the truth which is my son was killed in Iraq by the MKO.

At this moment the wish of my wife and I is to know the real cause to our son’s death and we urge the judicial authorities in Iraq to investigate the reason. Our son Soheyl Khattar was killed in Iraq and it is up to the Iraqi security and judiciary officials to take up with the detection of the cause.

I must also add I was a firm supporter of the MKO in the past and I even went to Turkey and made contacts with this organisation and introduced them a few individuals. But now I hate them so much that I do not wish my son’s body or any of his belongings remain with them.

Therefore I summarise my demands as follows once again and I appeal all legal authorities in Iraq to help me.

1. I appeal that the case of murdering my son Soheyl Khattar be investigated by the relevant judicial authorities in Iraq and the persons responsible be prosecuted.

2. I wish to visit one individual in Camp Ashraf that I personally encouraged him to join the MKO without the presence of the MKO officials in Baghdad or somewhere ells.

3. I would like to go to the grave of my son in Camp Ashraf and also seek his body and belongings with the aid of Iraqi officials.

Link to the original letter (Arabic)

Sahar Family Foundation in Iraq has started its new Website.

Mr Teymur Khattar and Mrs Khattar Appeal to the Iraqi legal authorities to deal with the case of the suspicious death of their son Soheyl Kattar in the base of the MKO in Iraq called Camp Ashraf.

Soheyl Khattar (the young man in the middle)

Soheyl Kattar left Iran legally with his Iranian passport along with his cousin Mehran Rastegar to go to Turkey to eventually go to Europe for employment. But they ended up in Camp Ashraf the base of the MKO in Iraq, a place which is quite hard to escape from. 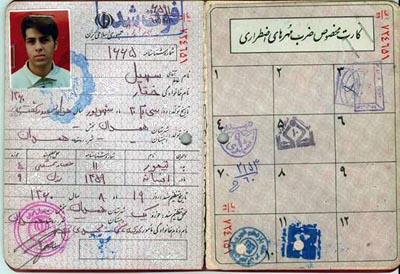 The birth certificate of Soheyl Khattar

Soheyl Kattar was born on September 1981. He was 20 when he left Iran and only 22 when he was suspiciously killed in the Camp Ashraf.

According to this publication Soheyl Khattar was killed during the bombings by the alliance forces in the second gulf war in Iraq.

Later the father was told that he was hit under his chin caused by an undesired shot. One of the commanders claimed he committed suicide. One man in Camp Ashraf said to the father covertly that Soheyl was killed since he was not satisfied with the MKO and he wanted to leave. 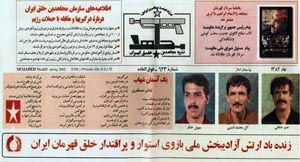 The Mojahed publication, the weekly journal of the Mojahedin-e Khalq Organisation (MKO) praises Soheyl Khattar as a martyr in the issue no 623 published in spring 2003.

To aid the families of the MKO members

Patience, dawn is near.

The Sahar (Dawn) Family Foundation is a non-governmental, non-political and non-profitable organisation which has been established to provide humanitarian aid to the families of members of the Mojahedin-e Khalq Organisation (MKO) who are based in Camp Ashraf in Iraq. This foundation is solely focused on charitable and human rights issues regardless of political or group considerations and geographical boundaries and only aims to help the suffering families.

The Sahar Family Foundation covers a great number of families as well as former members of the MKO who seek help. This foundation enjoys good support amongst the local and international bodies in Iraq which is the base of the foundation.

The MKO has been based in Iraq, precisely in Camp Ashraf, for more than two decades. This organisation is run as a classic cult and therefore would not give its members the chance of free association with the outside world or with their families. Therefore the families of these members are suffering severely and seek assistance from humanitarian organisations.

When the former regime of Iraq was toppled, a small light of hope lit the hearts of the families and they thought that, in the new situation in Iraq, they would be able to visit their beloved ones freely and adequately without the presence of a third party. Some of these families have not heard from their relatives for more than 20 years and some even don’t know if their beloved ones are still safe and sound. According to these families those who are residing in Camp Ashraf â€“ as is the case with many cults throughout the world â€“ are considered to be captives both mentally and physically and therefore are assumed as hostages. The Sahar Family Foundation is striving to reunite the members of these families again using every possible means.

Camp Ashraf is the base of the MKO members which is guarded by US forces in Iraq. On the other hand the present Iraqi government insists that Camp Ashraf must be dismantled. Iraqi constitutional law does not permit any foreign terrorist organisations to remain in that country. The US State Department as well as that of Canada, along with the European Union and the British parliament and many other governmental and international bodies have officially designated the MKO as a destructive and terrorist cult. Obviously the members of a cult and their families are considered to be the prime victims whom must be helped. In May 2005 Human Rights Watch published a report called ‘No Exit’ which details human rights abuses meted out by the MKO against its own members.

At the present time Baghdad is the central meeting point for the misfortunate families and the former members, as well as concerned entities which are all waiting for the crack of dawn. They seek help from all the humanitarian bodies throughout the world. Anyone can help a little. On the other hand, of course, Camp Ashraf, according to many international security professionals, is a centre for training terrorists. The families are concerned about the fate of their children who are subjected to brainwashing and terrorist training.

Please contact us. We would be more than pleased to have your comments and ideas. Help us in any way you can. The members of Sahar Family Foundation are all volunteers who have moved to Iraq to work in the difficult situation of that country merely to gain family reunions.