A Fox News producer tweeted out a photo of Arabic graffiti that supposedly shows Iranian support for President Donald Trump.
After a military strike killed Iranian Quds Force commander Qassem Soleimani on Thursday, Iranian protesters took to the streets to mourn Soleimani. However, Yonat Friling, from Fox News, portrayed support for Trump’s decision in Iran with a tweet on Friday.
“From Tehran this morning graffiti says ‘Thank you Trump’. (Source protected),” @Foxyonat tweeted.
Her tweet has since been deleted. 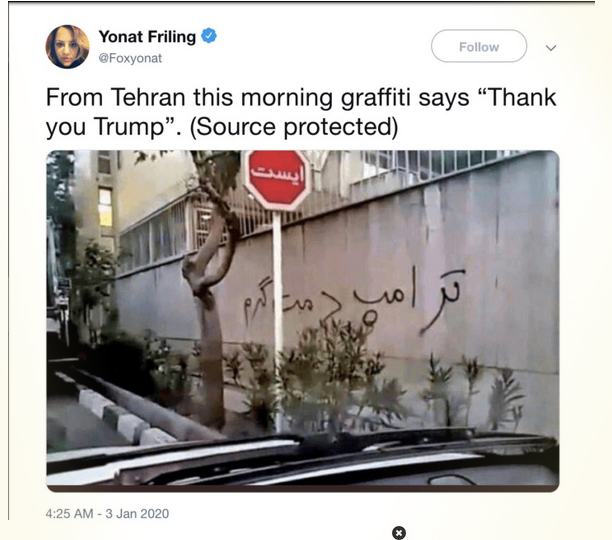 The image; however, has a few suspicious qualities. First, this is not the first time it has circulated on Twitter. In 2018, an account by the name Heshmat Alavi tweeted out the photo to show support in Iran for Trump. Alavi claims to be an anti-Iranian regime activist. When Alavi posted it, he says the graffiti translates to ‘way to go Trump.’

“While #Iran‘s regime may claim of having a social base opposing U.S. President Donald Trump’s #IranDealWithdrawal, this graffiti today from Tehran shows how Iranians are actually very thankful. ‘Way to go Trump’,” @HeshmatAlavi tweeted.

What is even more mysterious is the person or people behind Alavi’s Twitter account.
The Intercept reported in June that Alavi, who has been used as a source by the White House, does not appear to be a real person. A former member of the Mojahedin-e-Khalq (MEK), an anti-Iranian organization, told the Intercept that Alavi was a facade. Hassan Heyrani was a former high-ranking member of the organization according to the Intercept.

“Heshmat Alavi is a persona run by a team of people from the political wing of the MEK,” Heyrani said. “They write whatever they are directed by their commanders and use this name to place articles in the press. This is not and has never been a real person.”

The Trump administration used an article published by Alavi to justify leaving the nuclear deal in 2018. Alavi contended that there was Iranian support for the administration’s decisions.
This morning, the Alavi account tweeted out more alleged evidence of support for Trump’s most recent military strike.

Gizmodo reported that the support for Trump’s attack is not likely to be substantiated by the Iranian people. Dr. Pedram Partovi, an associate professor at American University, told Gizmodo that hatred for the American government far outweighs the current disdain for the Iranian regime.
“Even if the current government in Iran is unpopular with the vast majority of the Iranian population, Trump and his administration may be even more unpopular. Regular public opinion polling conducted by the University of Maryland, among others, bears this out,” Partovi wrote in an email to Gizmodo.
Friling did not respond to a request for comment from the Daily Dot.
H/T Gizmodo