Two lawmakers for Spain’s far-right Vox, Santiago Abascal and Iván Espinosa de los Monteros, received party salaries for eight months that drew on funds from donations by the National Council of Resistance of Iran (NCRI), sources have told EL PAÍS.
Both leaders received around €65,000 in total. The NCRI had an armed wing that was on the United States’ list of terrorist organizations until 2012, a year before the group funded Spain’s ultra-nationalist party.

Vox, which is now the third-largest force inside the Spanish parliament with 52 lawmakers, was created in 2013 with around €1 million donated by the NCRI. On December 17 of that year, the day that it was registered as a new party on the Interior Ministry’s records, Vox received its first transfer from abroad by sympathizers of the Iranian exiles. The transfer was in the amount of €1,156.22.

A month after that, then-secretary general Santiago Abascal and senior official Iván Espinosa de los Monteros began earning salaries paid for by the opponents of the Iranian regime. The money reached Vox thanks to the mediation of Alejo Vidal-Quadras, the party’s original founder and first president. Abascal’s monthly salary was fixed at net €3,570 (€5,000 before taxes), which he received between February and October 2014, for a total of €40,000.
Espinosa de los Monteros received a monthly net amount of €2,300 (around €3,083 before taxes), according to two former party officials. Espinosa de los Monteros, who is now the spokesperson for Vox in Congress, earned this salary during the same period of time as Abascal, but invoiced the payments through a company. Another Vox lawmaker, Javier Ortega Smith, turned down the salary.
There are only two donations that did not come from the Iranian resistance movement, both under €2,000
The monthly amounts were determined at a breakfast meeting at the home of Espinosa de los Monteros and ratified at Vox’s Madrid headquarters. Both Abascal and Espinosa de los Monteros have declined requests for comment from this newspaper.

The gross €65,000 that both lawmakers earned for eight months came from a common party fund fed by 141 international money transfers made from various countries by NCRI sympathizers, according to a secret internal spreadsheet revealed by this newspaper last year.

Almost €1 million
In total, the ultra-nationalist party received €971,890.56 between December 2013 and April 2014. The money funded the 2014 European election campaign as well as various party expenses ranging from the rent on the party’s first headquarters on Diego de León street in Madrid to furniture and computer equipment.
In order to raise this amount, the NCRI sent out 35 collectors around the world: money was obtained from around a thousand supporters in cities and neighborhoods of around 15 countries, including Germany, Italy, Switzerland, Canada and the United States. Most of these contributions were anonymous, and the donors’ identities did not show up in the records of the bank account that Vox opened at a Catalan lender. This information did not appear in the party’s internal accounts, either. But the accounts do show the names of the 141 individuals who transferred the money.

A group under scrutiny
The National Council of Resistance of Iran (NCRI) had an armed wing that was on the United States’ list of terrorist organizations until 2012, a year before the group funded Spain’s ultra-nationalist party.
Founded in Tehran in 1965 by three university students, the organization’s military legion, the Mojahedin-e Khalq (MEK), underwent a lengthy journey in the international courts between 2003 and 2014 before it was taken off the European Union and United States’ blacklists. Britain stopped considering it a terrorist group in 2008 following a procedure initiated a year earlier by 35 lawmakers. A November 2018 investigation by The Guardian linked the decision to delist MEK to a “lavish lobbying campaign” to secure the support of global leaders.
Every year, the NCRI organizes a large event in Paris where Alejo Vidal-Quadras has been a guest speaker on more than 15 occasions. Other guests have included Spain’s former prime ministers José María Aznar, of the Popular Party (PP), and José Luis Rodríguez Zapatero, of the Socialist Party (PSOE).
In the records of the account that Vox created to help fund the campaign for the May 2014 European elections, there are only two donations that did not come from the Iranian resistance movement, both under €2,000. The foreign funds stopped coming in before the election was held.

Abascal and Espinosa de los Monteros were aware that their salaries were being funded by the NCRI. In January 2019, when EL PAÍS first revealed this information, Vidal-Quadras stated that “Abascal was aware of everything, I explained to him my relationship with the NCRI, and I told him that they would fund us. He was delighted. He didn’t put up any opposition.”
Vidal-Quadras’s relationship with the Iranian exiles goes back to his days as member of the European Parliament (1999-2014), when he received a delegation from this group in Brussels. Vox’s first president left the party in 2015 due to differences with Abascal after he failed to secure a seat in the European chamber.
When Abascal began to earn a salary from Vox, he had no other income. A few months earlier he had given up party membership in the Popular Party (PP) and lost his job as managing director of the Madrid Foundation for Patronage and Social Sponsorship when the regional agency was eliminated. Before that, former Madrid premier Esperanza Aguirre had placed him at the helm of the Data Protection Agency.
During his period in the Basque Country, from where he hails, Abascal served as a public official with the PP: as a councilor in the town of Llodio, as a member of the provincial parliament of Álava, and as an advisor to the city of Vitoria. His eight months on a Vox salary were the first time that Abascal earned money that did not come from public coffers. During these eight months, Espinosa de los Monteros was already involved in private business activities, and the fact that he demanded a party salary caused “surprise” among Vox members.
[email protected]
english.elpais.com 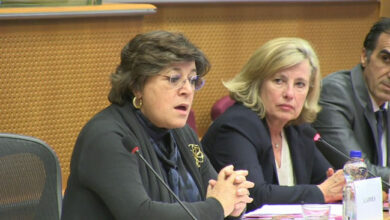