“Both the far right and Islamist extremists benefit when their professed enemies engage in a terror attack or do anything that confirms their narratives. They want to see more rifts and more chaos in society. When communities are scared, when they’re driven apart, they’re vulnerable to the extremist narratives.”

News resurfaced this February of political collusion between the infamous Iranian MEK group (Mojahedin-e-Khalq), also known as the MKO, a cult-type organisation centered around the quasi-worship of its two leaders: Maryam Rajavi and her spouse Masoud Rajavi, and Spain’s latest far-right outfit: Vox.

As Vox made its entry into Spain’s political life by winning a seat in Andalusia at the regional parliamentary elections in April of last year, questions were raised as to the origin of the party’s funding as well as its political associations, if any, to other far-right movements. Little could anyone have imagined that the group, which advocates a fiercely Islamophobic front, would benefit from the financial largesse of one very vocal Islamist group: the Iranian MEK.

While Spain’s right-wing has previously been relatively light on anti-Islam rhetoric, preferring to rail against secessionists in Catalonia and elsewhere, Vox has no such compunction. One of the party’s earliest controversies was a wildly Islamophobic video conjuring a future in which Muslims had imposed sharia in southern Spain, turning the Cathedral of Córdoba back into a mosque and forcing women to cover up.

Documents leaked to the Spanish newspaper El País show that almost 1 million euros donated to Vox between its founding in December 2013 and the European Parliament elections in May 2014 came via supporters of the National Council of Resistance of Iran (NCRI), an alias of the MEK.

Made infamous in the late 1970s for its anti-Shah, anti-America narrative, the MEK reinvented itself a terrorist organization after it was cast out of Iranian political life (1980) by late Ayatollah Ruhollah Khomeini on account of its radicalist views. Following a series of bloody terror attacks in Iran, the MEK found refuge in Iraq, under the protection of then-strongman Saddam Hussein.

To secure its position and benefit from Iraq’s protection, the MEK fought alongside the Iraqi army against their own countrymen during the Iraq-Iran war, arguing that it sought to reform the Islamic Republic into a vibrant democracy, made to the image of its political leadership – was born the cult of the Rajavi.

Today the MEK has seen its crimes against U.S. interests expunged on the basis of its desire to see Iran’s Ayatollahs come undone. 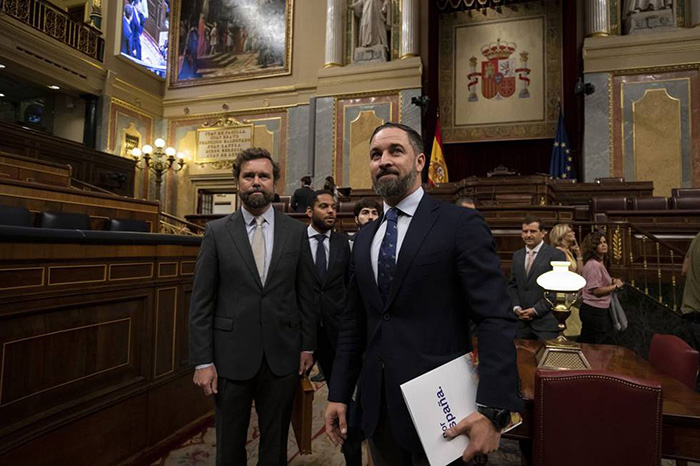 Anti-capitalist, anti-imperialist and anti-American, MEK fighters killed scores of the Shah’s police in often suicidal street battles during the 1970s. The group targeted U.S.-owned hotels, airlines and oil companies, and was responsible for the deaths of six Americans in Iran. It was actually the MEK which first etched their hatred of America into Iranians’ political subconscious through its militants’ cries of: “Death to America by blood and bonfire on the lips of every Muslim is the cry of the Iranian people,” and “May America be annihilated.”

A favorite among Trump hardliners, the MEK has worked terribly hard since the fall of Saddam Hussein to reinvent itself as a friend of the West one must admit with great success. Following a lavish lobbying campaign to reverse its designation as a terrorist organisation – despite reports implicating the group in assassinations of Iranian nuclear scientists as recently as 2012, the MEK was de-listed by the UK in 2009 and by the U.S. in 2012.

Under Maryam Rajavi’s influence – her husband has not been seen in public since 2003 – the MEK has won considerable support from sections of the U.S. and European right, eager for allies in the fight against Tehran.

While the MEK presents itself as a reformist group, in that it seeks to adopt and develop a modern revolutionary interpretation of Islam – in sharp contrast to the rigor of Iran’s traditional clergy, the group has often been described as a mix between Marxism and populist Islam – qualities which are an anathema to European far-right political movements.

And yet, we know now that the two have found some interesting common ground: if not on the basis of their respective ideologies, in their need for reciprocal rage. And though at first glance Islamists and far-right extremists may wish each other’s demise, they also need each other’s hatred to justify and even rationalize their respective existence.

United In Their Extremism

In truth, to see the two join together is not that much of an intellectual stretch, rather an alliance of convenience at a time when extremism is seeking to define the global narrative.

This is the argument Julia Ebner, a research fellow at the London-based Institute for Strategic Dialogue, makes in her book The Rage: The Vicious Circle of Islamist and Far Right Extremism – that both ends of the political and social spectrum desperately need each other in order to push their narratives, and so why not fund each other?
Pssst, while you’re here…

Speaking in an interview Ebner notes: “Both the far right and Islamist extremists benefit when their professed enemies engage in a terror attack or do anything that confirms their narratives. They want to see more rifts and more chaos in society. When communities are scared, when they’re driven apart, they’re vulnerable to the extremist narratives.”

And, “So in a really fundamental way, each side has good reasons to celebrate when something horrible happens. If ISIS blows up a shopping center in some Western town, the far right points to that and says, ‘You see, we were right all along. Muslims are at war with the West.’ Likewise, right-wing terrorism or rhetoric gives Islamist extremists more fodder to sell their narrative about the West being hostile to all of Islam.”
A Story Of Political Codependency

“From the day it was founded in December 2013 – the same day that it registered as a political party with the Spanish Ministry of Interior – Vox started to receive Iranian funds,” said Joaquín Gil, one of the El País journalists who first reported on NCRI-linked funding of Vox.

Gil went on to explain that donations came from dozens of individual sources, from several countries including the United States, Germany, Switzerland, Canada, and Italy in amounts ranging from 60 to 35,000 euros, totaling almost 972,000 euros, in the period from December 2013 to April 2014, shortly before the European parliamentary elections.

According to Gil, Vidal-Quadras, a leading member of Vox had “asked his friends at NCRI … to instruct its followers to make a series of money transfers.” Vidal-Quadras has since confirmed that the MEK/NCRI had in fact organized the fundraising for Vox, alleging that at the time the MEK had no idea Vox was a far-right outfit.

Vox is arguing that the money was a personal favor to Vidal-Quadras, who, during his time at the EU Parliament had helped rehabilitate the MEK as a viable counterpart against Iran’s Islamic Republic.

In any case it is now evident that Vox could never have achieved any political victory without the financial output volunteered by the MEK – proof that extremists, for all their rhetoric, are more than willing to work together to push their respective narrative into the spotlight.

In their extremes it is often that Islamic radicals and the far-right meet. Both ideologies are based on the victimization of an in-group and the demonization of an out-group. More to the point both blame the ‘corrupt political establishment’ and ‘rigged mainstream media’ for all that is going wrong and aim to bring about radical societal change by creating countercultures.

As Ebner highlights in her book, “On both sides, you find groups that embrace violent solutions – including terrorism and hate crimes – to reach this goal, and others who resort to strategies such as hate preaching, information warfare, vigilantism, or street activism. Ultimately, both tend to encourage apocalyptic thinking and conspiracy theories, which can incite violence and in some cases inspire terrorism.”
Catherine Shakdam, Citizentruth.org

(The views and opinions expressed in this article are those of the authors and do not reflect the views of Citizen Truth.)