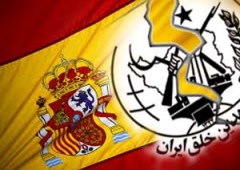 “Lawmakers in Spain voted on Thursday [February 25th] in favour of a bill that will reduce the capacity of the country’s courts to pursue cases of human rights abuses committed abroad.” The Local Website reported.

The bill curbs the use of the doctrine of universal jurisdiction, which allows judges to try certain cases of crimes against humanity that took place in other countries.

Mujahedin Khalq Organization was seeking to manipulate the Spanish judges to promote its agenda.

After the September 1st Camp Ashraf clashes and the allegedly 7 Camp residents missing, MKO leaders forced members in Camp Liberty into hunger strike. After 107 days of fruitless show of hunger strike and the escalation of criticisms, Maryam Rajavi ordered an end to the hunger strike under the pretext that a Spanish investigative judge accepted to investigate the allegations of two members of the MEK that Iraq’s National Security Advisor has been involved in Camp Ashraf events.

Then the group websites broadcasted this as a ‘victory’ and in Farsi they portrayed this as an actual court ruling against an Iraqi official.

The pass of the bill is a bad news for MKO leaders. Under the bill, judges could investigate crimes against humanity, war crimes and genocide only if the suspect is a Spanish national, a foreigner living in Spain or a foreigner in Spain whose extradition has been denied by Spanish officials.

The spokesman of Spain’s ruling conservative Popular Party said the reforms outlined in the bill were needed to avoid "useless disputes that only generate diplomatic conflicts".