The websites affiliated to the Mojahedin-e Khalq Organization (MEK, MKO, or Rajavi cult) have published an article titled ‘An open letter from a number of members of the MEK in Ashraf 3 in Manza to the Albanian officials’ on June 24, 2020, signed by a number of cult members.

Reviewing this open letter reveals some facts about the reactionary nature of the leaders of the Rajavi cult. In the letter, along with dealing with various irrelevant topics, the main problem of the cult is mentioned.

The focus of the cult members’ attack is “an Albanian-language website called Gazeta Impakt”. The crime committed by this site apparently is that it reflects the desires of the suffering families of the members of the Rajavi cult to communicate with their loved ones trapped in the MEK camp in Albania. 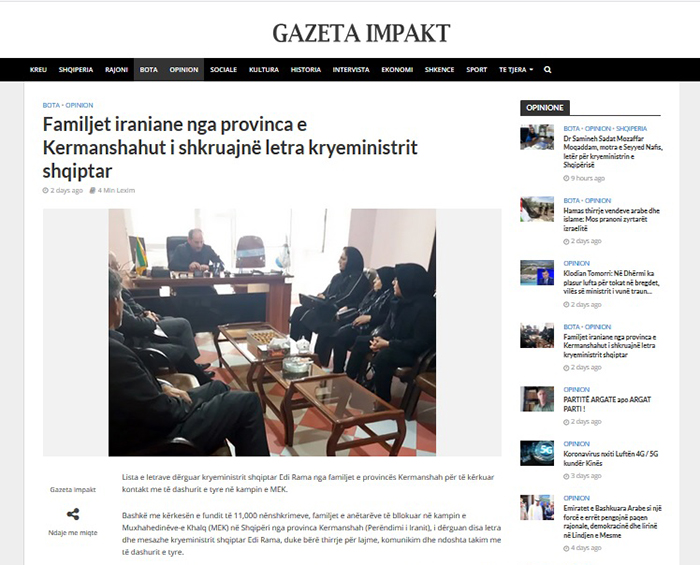 Seemingly, this very big crime is enough to threaten the cultic attitude and authoritarian system of the Rajavi cult so that it considers Gazeta Impakt’s coverage as a big security conspiracy against the residents of the isolated and remote camp of the MEK in Albania, and therefore asks the Albanian judiciary to prosecute and suppress this site and its management. The site has been measured by the cult as endangering the security of the MEK.

The letter addressed to Albanian officials, in an authoritative tone, complains against civil activist Olsi Jazexhi, lawyer Migena Balla, and journalist Gjergji Thanasi about why these people in Albania have freedom of expression, and why they are not like some corrupt officials serving the Mafia and the MEK, or rather the US Embassy in Tirana.

According to the cult, these people have other crimes as well. They have also sympathized with the former MEK members in Albania, who the MEK and the Albanian government are trying to pressurize. And they have expressed their sympathies for the family of Somayeh Mohammadi and other families who have arrived in Albania.

This letter clearly reveals the nature and image of the MEK. Suppose that Massoud and Maryam Rajavi get to rule in Iran and a person or a site states something that they do not like, then what happens? The person will definitely be called a terrorist and their action judged as a conspiracy against security, and then the person will be prosecuted and condemned.

When elderly mothers, fathers, and spouses who simply want to communicate with their loved ones in the Rajavi cult’s camp in Albania are called terrorists, who can be considered not a terrorist by the leaders of the cult?

When the actions of three ordinary Albanian citizens, expressing compassion and reflecting the wishes of the suffering families and former members are called terrorism, what sort of action would not be considered terrorism?

And when the MEK shows so much weakness and resentment against the rightful demands of the families and does not tolerate it and reacts hysterically, what kind of people’s demands of human rights and justice will it recognize and accept?

Fortunately, the leaders of the Rajavi cult are increasingly revealing their cultic and dictatorial nature.