Forced marriage may be unheard of in the today’s world but it is a phenomenon that can threat any society. It isn’t limited to developing countries; it can happen anywhere in the world. Many cults, in developing and developed countries force women and men into marriage. Organizational marriage was a type of forced marriage practiced by the Mujahedin Khalq Organization (the MKO/ MEK/ PMOI/ Cult of Rajavi) and is a sign of member`s commitment and allegiance to the group`s cause.

Although the MEK is notoriously known for its cult-like regulations that forced members to divorce their spouses, it should be noticed that forced marriages were the group’s organizational decree just a few weeks before the divorce became mandatory in the group. There were numerous cases of marriages that took place under the order of the MEK authorities.

The era of forced marriages dates back to the foundation of the group in the 1960s.

The cases of Forced Marriages grew after Massoud Rajavi became the leader of the group. He lost his first wife in the violent confrontation with the newly established Islamic Republic. Then, he became the pioneer of organizational marriage when he married Firouzeh Banisadr, the daughter of the deposed Iranian president Abohhasan Banisadr due to their mutual alliance against Islamic Republic. He then divorced Firouzeh as a result of breaking off his alliance with her father. 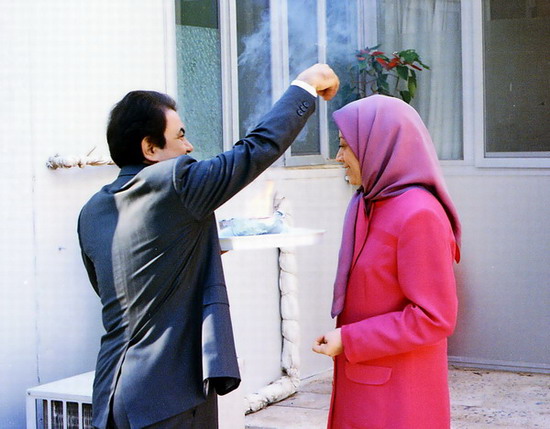 Massoud’s third marriage with Maryam Azdanlou, his office administrator and the wife of his close friend Mehdi Abrishamchi did not seem to be organizational or forceful one. Massoud and Maryam’s marriage was called the “Ideological Revolution” that ended with a series of cult-like regulations in the group.

Forced marriage was one of these rules. Single Members and those who have lost their spouses in the group’s terrorist operations were ordered to marry anyone the leaders picked for them. Huge emotional and mental contradictions took place to these people.

Mitra Yusefi, defector of the group recalls a woman in the group named Fahimeh. “Fahimeh is a kind and emotional woman whose first husband was martyred in “Forogh Javidan” operation,” Yusefi writes in her book.

“She could not help thinking about him, she was always speaking of him and she was highly opposed to second marriage… but after a while she was forced to get married again. However, she still talks of her deceased husband Aziz.”

Mitra Yusefi reveals other aspects of forced marriages in an interview with Mardom TV. “In the early years of the foundation of the MEK, marriage was obligatory in order to recruit members,” Yusefi tells Sorbi of Mardom TV. “For example they found out that a member loves someone out of the organization. They made them marry to recruit the other person.”

She also states that inside the organization the case was a little different. “As the number of female members were less than male members, they used to show a list of men to a woman,” Yusefi says. “The woman had to choose from the list. This was the right to choose!”

Behzad Alishahi former member of the group recounts the story of Davud Ahmadi, a victim of the MEK. Davud was mysteriously killed in the MEK although her mother, sister and brothers were devoted members of the group.

Through the sad story of Davud, Alishahi writes of his marriages:

“In 1987, Davud married a girl named Zari Nikshenas who was a member of the MEK too. She was from the North of Iran. Their marriage lasted only seven or eight months until Zari was killed in the operation. Davud was really in love with her. A few months after the operation the leaders ordered Davud to marry another woman named Hazineh Jani Kolahi.”

This was partly the root of Davud’s conflicts with the leaders. He was still obsessed with the loss of his first wife and was not ready to take a new wife after such a short time. His sister Parvaneh who defected the group shortly after the shadowy death of Davud speaks of Davud’s paradox before and after the second forced marriage. They used to meet each other secretly to open up to each other their pain and sufferings under the oppressive atmosphere of Camp Ashraf. In one of these secret visits Davud talked to his sister weeping tears. “I have been under pressure to marry again. I am even under punishment for being in love with my first wife,” Davud told Parvaneh.

“I explain to them that I still love Zari and cannot forget her and I think that her love does not stop me in my struggle but it motivates me to fight better but they do not understand me at all and just punish me.”

Anyway, Davud had no choice but to accept marrying Hazineh. They married and the situation became worse for both of them. Parvaneh saw Davud a few weeks after his second marriage. Davud told his sister that his new wife Hazineh also had lost her first husband Hassan in Forough Javidan. “Any time that Hazineh and I meet each other (once a week) we just talk about Zari and Hassan (our ex-spouses),” Davud told Parvaneh. Hazineh was pregnant with Davud’s son when David was killed.

As Yusefi says, these forced marriages took place only two weeks before forced divorce became a rule! These are very few cases of many bizarre relationships in the MEK. Scattered families, orphaned children, forced marriages and divorces, all indicate the huge violation of human rights that make MEK the cult of Rajavi.