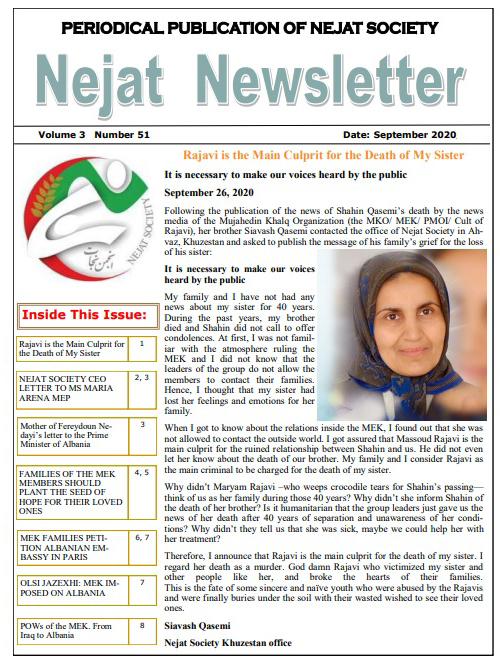 Organization (the MKO/ MEK/ PMOI/ Cult of Rajavi), her brother Siavash Qasemi contacted the office of Nejat Society in Ahvaz, Khuzestan and asked to publish the message of his family’s grief for the loss of his sister:

– NEJAT SOCIETY CEO LETTER TO MS MARIA ARENA MEP
On behalf of the suffering families of members of the Mojahedin-e Khalq Organization (MEK, MKO, Rajavi Cult), based in the organization’s camp in Albania, I would like to inform you that this organization, due to its cultic behavior, prevents its members from communicating with the outside world, particularly with family and friends. Recently, a petition was signed by more than 11,000 relatives,….

– Mother of Fereydoun Nedayi’s letter to the Prime Minister of Albania
I am Roghayeh Farazian Fard Kohan, the elderly mother of Fereydoun Nedayi. My son went to military services in the army in Iran in 1979 and was captured by Iraqi forces on the battlefield in 1980. He was held captive in Iraqi POW camps for eight years. In 1988, a ceasefire was established between Iran and Iraq, but the Iraqi government refused to return prisoners of war. A year later, in 1989, the situation in the POW camp was deliberately worsened, and then the MEK entered and talked to the POWs …

– FAMILIES OF THE MEK MEMBERS SHOULD PLANT THE SEED OF HOPE FOR THEIR LOVED ONES
The MEK leaders block communications with the outside world, particularly families are labeled as enemies of the group, and are considered “agents of the Iranian Intelligence” and eventually the enemies of their children! However, families who are inside the MEK camp live separately.
Spouses were forced to divorce. No parents are allowed to live with their kids. No sibling is allowed to socialize in the camps unless it is the New Year’s celebration. This is part of the regulations of every destructive cult.

– MEK FAMILIES PETITION ALBANIAN EMBASSY IN PARIS
The 11,000 signatures and letters directed at the PM, President, and officials of the Albanian government from the families were presented in a book submitted to officials in the Embassy.Families are being refused entry visa to Albania by the direct request of leaders of Rajavi Cult. This denial of access to family members is a direct abuse of the UN Human Right Charter OLSI JAZEXHI: MEK IMPOSED ON ALBANIA

– POWs of the MEK. From Iraq to Albania
MEK has been left reeling from the inescapable reaction by Albanians to its attacks on journalists and academics. In particular, Olsi Jazexhi, who is a well know academic with a strong media presence, has invited Maryam Rajavi to a public debate about her activities in his country. In another interview, he pointed out that MEK were imposed on Albania by the US and that Albanians,since then, have protested and demanded that MEK should not be located in their country.