There is no information about her current whereabouts. She was the daughter of a Mujahed family. Her father Mohammad Khabazian and her mother Maryam Hajkhanban were members of the Mujahedin Khalq Organization (the MKO/ PMOI/ MEK/ Cult of Rajavi).

In 1991, Adeleh and her siblings together with hundreds of children of the MEK members were sent from Camp Ashraf, Iraq to Europe. The authorities of the group relocated Adeleh and her younger sister Atefeh in Germany and their two brothers in the United States.

At the time, Adeleh was a seventeen-year-old student. The group had charged her with the responsibility of training younger children of the Mujahedin. Like other children, she had also some other organizational duties such as fundraising activities. “On the weekends, she had to work for the group from early in the morning until late in the evening in cities across Germany,” Nadereh Afshar writes about Adeleh in her book on the MEK titled “Love Forbidden”. 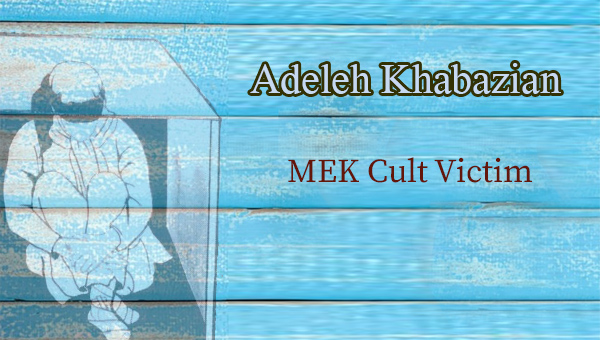 For Adeleh, forced hijab was the subject of disputes with the authorities of the MEK. Although she was living in Europe, she was forced to cover her hair by the group commanders. Nadereh Afshar writes about Adeleh’s issues with the MEK:

“She complained about forced hijab constantly and in response she was always attacked by the group authorities… After too much fighting, Adeleh decided to uncover her hair. Tayebe Rahmani Lahuti — who was a member of the group’s Elite Council and wanted to bring freedom for Iranian people—told her that her mother should allow her to remove her scar , after she realized that beating and intimidating Adeleh would not work!
“They brought the mother on the phone (the line of resistance!) to intimidate her daughter to cover her hair. The innocent girl told her mother: “I am ashamed that my mother is a Mujahed”. She hung up the phone while her mother was lecturing about the revolutionary advantages of hijab.”

The MEK commanders held several meetings for Adeleh to convince her to keep her hijab. Having been failed in their efforts, they finally labeled her “traitor chicken” and expelled her and her sister out of the organization.

Adeleh who had got rid of tough days of living inside the group, started exposing facts about the world inside the mujahedin khalq. Now, it was the father’s turn to take action to coerce the daughter to the organization’s rules.

“The father himself was a victim of Massoud Rajavi’s doctrine, came to punish his daughter. Adeleh was punched and kicked by her father although he had never harassed his children until that day,” Afshar writes about the fate of Adeleh in the MEK.