From deep inside its rabbit hole in Albania the MEK has created yet another Alice in Wonderland style fairy tale about Iranian spies and agents coming to get them. In doing so, Maryam Rajavi reminds us exactly why the European Union expelled her and her lieutenants from Europe and sent her into exile in Albania. The MEK presence – a magnet for trouble – presents an unacceptable national security risk to any country. From bomb plots in Paris and Belgium, the assassination of their own man Mohammad Reza Kolahi in the Netherlands, mysterious assassinations of other MEK critics, a violent attack outside the European Parliament, and self-immolations, the MEK are implicated in many violent incidents on European territory. In 2018, their presence finally became untenable. Sadly, Albania, under the American heel, is now forced to host this dangerous group.

And with this latest statement, Rajavi also reminds us of the damage the MEK has already caused to Albanian civic life and its institutions. It appears that many Albanian politicians, police and the security services have become enthralled by the MEK mind control methodology. Not only has MEK unduly influenced Albanian foreign policy against Iran, the cult has also exerted unaccountable influence over the country’s internal security, without doubt using American pressure as backing.

Here’s an example: In recent days, Albanian police arrested an Iranian man, Bijan Pooladrag, with links to the MEK. The MEK immediately issued a statement disowning him and labelled him “an agent of the Iranian regime’s Ministry of Intelligence and Security (MOIS)”. In fact, according to eyewitnesses Pooladrag was arrested straight after coming out of the MEK offices in Tirana where he had gone to get his salary. This is because, although still working for MEK, he refused to live inside their camp. In special circumstances and on a needs-must basis MEK allows members to live outside the compound on condition that they do not speak publicly about their experiences with MEK. The financial allowance they give is conditional on the subject continuing to work for MEK on computer messaging and trolling.

The arrest came about when Pooladrag’s landlady and her daughter became suspicious that he was using their phones and computers without their knowledge. The Prosecution case states that he is “suspected of committing the criminal offense of ‘Illegal interception of computer data’, ‘Interference in computer data’, ‘Misuse of equipment’ and ‘Interference in computer systems’ provided by Articles 293 / a, b, c, of the Criminal Code.” Pooladrag allegedly utilized unauthorised phones to open accounts on Instagram, Facebook, WhatsApp, Messenger and Telegram, which were used in Farsi language. This exactly matches with the MEK demand that members like Pooladrag who live outside the camp continue with social media work to get paid. It is also clear to those who know him that Pooladrag is not computer literate enough to set up his own networks and systems. These will have been done for him by MEK at some stage. Clearly, Pooladrag was engaged in clicking for Heshmat Alavi.

For the absence of doubt, Pooladrag is a hardcore MEK member. He was injured in the September 1st massacre in 2013 in Iraq (number 24 on this list) as one of the 100 special members tasked with holding Camp Ashraf, willing to die for their leader. Since arriving in Albania, although he lives outside the camp, Pooladrag has made no attempt to contact his family in Iran (number 34 on this list), a requirement of MEK membership. His sister is still searching for contact.

According to former MEK members who knew Pooladrag, he was warned several times by MEK about his behaviour outside the camp. He was told ‘you can’t go to the seaside and post ‘naked’ pictures of yourself and expect us not to do something’. It seems that MEK have involved SHISH to set him up for punishment. Ironically, the punishment for these alleged crimes in Albania is 7 years imprisonment. The same sentence with which the courts of Saddam Hussein threatened those who wanted to leave MEK – seven years in Abu Ghraib prison for entering Iraq illegally. Interesting how quickly and seamlessly the Albanian judicial system has taken over this role of punishing MEK’s enemies.

Anyone who thinks that the MEK’s words are not full of lies and misinformation is sadly naive. MEK is one of those strange entities that not only invent their own conspiracy theories but wholeheartedly believe in them too.

Evidence of MEK influence over police behaviour can also be found in the statement about Pooladrag. As though to deliberately confuse the issue, among its list of “MOIS agents” who live in Albania, MEK has included one Italian Iranian Daniel Kasraei who is well known as a MEK go between, deported back to Italy for ‘spying’. However, the others listed are genuine former members of MEK, who have since denounced the group for its human rights abuses. Their backgrounds are interesting of themselves. Take the case of Ehsan Bidi. The MEK claim he was deported earlier this year. In fact, Bidi was, at the behest of the MEK, subject to illegal detention for a year, illegal trafficking by Albanian police over the Greek border in August this year, followed by a hasty return to Tirana with an apology by the chief of police after lawyers intervened. He was happily living in Tirana with his friends until the MEK again issued a statement on October 14th that Bidi had been deported. Three days later, Albania’s police again placed Bidi in a detention centre “for a few days” and asked him to sign deportation papers. The MEK’s interference in the internal situation of Albania is becoming untenable.

Another former MEK member mentioned in the statement is Hassan Heyrani who, according to the MEK, ‘hangs out’ at a café in Tirana. In fact, Heyrani is manager of the Faranak Café. Like Ehsan Bidi, Heyrani represents the MEK’s worst nightmare: a former member who is successfully recovered and standing on their own feet, working and living a free life since escaping the cult. 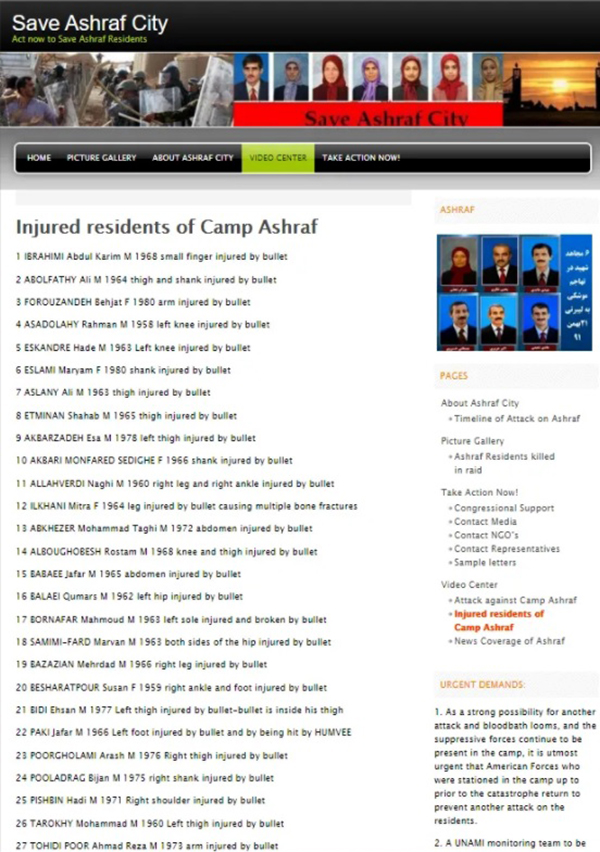 Since Ehsan Bidi was freed, another former member has been targeted by MEK for police intervention. Gholamreza Shekari, again arrested solely on claims made by the MEK of criminal activity, has been detained since September while investigations take place. MEK’s accusation of ‘people trafficking’ is corrected by Olsi Jazexhi – a well-known media personality and historian who has been following the MEK’s activities since their arrival in his country in 2016 – “Golam Shekari did not send the Iranian refugee to the borders of Albania. He sent him to a bus station”.

Elsewhere Jazexhi says Rajavi has “declared war on any Iranian that steps in Albania” and has had influence over the deportation of 80 Iranians from the country. Ironically, Rajavi has said nothing about the arrest of two Iranians at Rinas Airport two days previously, attempting to smuggle £30,000 in old £20 notes on a flight to Luton, UK. Anyone who knows anything about MEK knows, of course, that it is standard MEK activity to transfer large amounts of cash from place to place for money laundering purposes. We do not know for certain that they are linked to MEK, but there is no other reason the organisation has not spoken a word about them, while demonising any and every other Iranian who has set foot inside the country.

As usual, the MEK reveal much more about themselves and their current predicament in their public statements than they realise or intend. There is a sense of desperation to recent MEK outpourings. In the run up to the US Presidential election, and amidst the devastation wrought by the coronavirus pandemic, nobody is paying attention to them at all. Isolated and abandoned in a small country, Maryam Rajavi has tried to push the US to force the EU to allow her to go back to Paris or Brussels for even just a couple of hours to show she is still welcome there. This has been rejected. The EU contact simply advised, ‘take them to Washington’. Documents were put on the table showing cases of the MEK working for the Americans against the EU – the assassination of Kolahi in the Netherlands, the false flag Paris bomb threat and payments to the extreme right-wing VOX party in Spain.

Faced with this failure to re-enter Europe, Rajavi has resorted to using another layer of MEK loyalists – those posing as independent analysts – to keep her cult relevant. This explains the flurry of shock revelations promoted by MEK veterans Ali Safavi, Alireza Jafarzadeh and Sona Samsami in the USA. The use of Arab News to launch this campaign signals that not only is Rajavi desperate for attention but that the Saudis are very concerned about a Biden victory which would put a halt to the free rein enjoyed under Trump. The mercenary MEK are happy to jump on this bandwagon as a means to trumpet their presence in the anti-Iran regime change political arena.

This contrasts with actual MEK activity in Albania where it is clear they are resigned to remaining. Information from inside the camp reveals that a public relations department has been formed from the so-called Leadership Council which has been tasked with distributing goods to the local population around the camp. The Mayor of Durres is being ‘bought’ as the Mayor of Auvers sur Oise was ‘bought’ previously. Locals are being recruited as the MEK are gaining control over the Durres citizenry.

However, in the last analysis it may be too late for the MEK to exert control over the external environment. From inside the camp, word is that the body of the camp is in chaos. Every day people are shouting and screaming and rebelling. They imprison someone and next day someone else kicks off. Dissent is getting out of hand. And the more this happens the more they are moving people into the centre of the camp so they won’t be heard or seen from the outside. Layers of surveillance and security are in place to prevent outbreaks of trouble.

Certainly, as bad as things for her in the outside world, Maryam Rajavi’s worst threat is coming from her disaffected membership. With nothing but punishments and crackdowns to offer and no political wins to boast of beyond self-publicity, it is hard to see how she can recover the morale of the members. And as a lot of political leaders are discovering now, once you lose the trust of your people to lead you, there is nowhere to hide and nowhere to go but down.