A Cult defector: Barat used to find somewhere safe to covertly watch the only photo of his son that he had

Farhad was two years old when his father went to Iran-Iraq war. This was the beginning of a prolonged separation. He was sixteen when he heard his father’s voice on the phone, for the first time. He called from Germany, his voice sounded terrified and he thought that Farhad was living in a devastated Iran in which there were no schools. His father did not believe Farhad telling him that he was in grade one in high school. 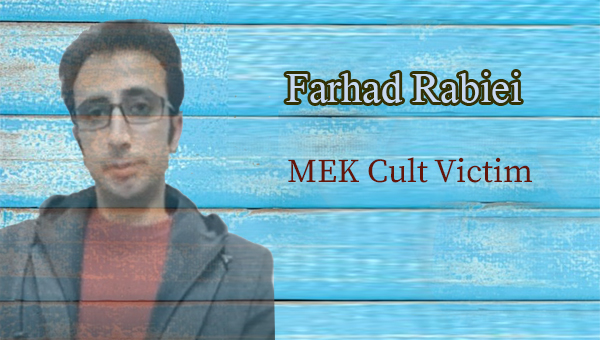 The short phone call, at least, let Farhad and his family know that his father was alive. Barat, Farhad’s father was taken as a war prisoner by the forces of the Mujahedin Khaql Organization (the MEK, MKO, PMOI, Cult of Rajavi). As Barat later told his mother in a shadowy visit in Turkey he had been intimidated to stay in the MEK. The mother (Farhad’s grandmother) gave a photo of Farhad to his father.

In 2003, Farhad and his family went to Camp Ashraf, Iraq to visit his Barat. Farhad was nineteen at the time. As soon as he saw his father, he hugged him but the authorities of the MEK got mad with Barat. He was not allowed to receive his family warmly. “Farhad is the mercenary of the Iranian regime”, the authorities argued.

Farhad recalls the bitter memories of that day. When his father wanted to hug his wife (Farhad’s mother), he was confronted by the group authorities again. Farhad witnessed her mother being physically attacked by female members of the MEK. “That day was the worst memory of my whole life… I saw with my own eyes that my mom’s heart broke, she was standing away weeping tears while MEK members were shouting at her” he says.

During the visit, Barat secretly told Farhad that a microphone was hidden under his clothes. He was not able to talk comfortably with his family because he was under supervision. Farhad was under too much pressure especially when Mehdi Abrishamchi one of the authorities of the MEK started addressing the families in the hall. He left the hall. The group supervisors did not allow Barat to say goodbye to his son. Farhad returned home with tearing eyes. “After that visit, I was sick for a several months,” he says.

The other side of this heartbreaking destiny is Barat of whom there is not enough information from inside the MEK’s cut-like structure. Mohammad Razaghi a defector of the group is one of the few people who know Barat Rabiee. He worked with Barat in the same base for about ten years. “Barat used to find somewhere safe to covertly watch the only photo of his son that he had,” Razaghi said.

Today, in the fourth decade of his life, Farhad is still looking forward to the release of his father from the Mujahedin Khalq. He has his own business in Iran. He assures Barat –in case he finds the chance to hear his son’s voice– to accept his father whole-heartedly and to help him make a comfortable living.