Her organizational name was Faezeh. She was living with her parents in Camp Ashraf when, in 1990, the leaders of the Mujahedin Khalq Organization (the MKO/ MEK/ PMOI) separated her from them and sent her to Europe together with seven hundred children of the MEK. The same as many other MEK children, Marjan was then sent back to Camp Ashraf to get trained as a member of the group’s militia. 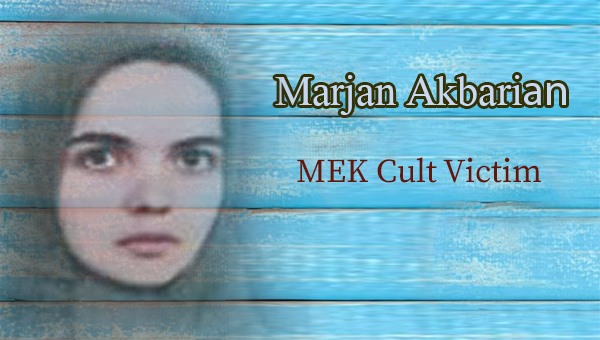 According to Maryam Sanjabi, ex-member of the group, as a teenager, Marjan had received technical trainings. She was then transferred to the MEK’s propaganda unit in 2004 and there, she asked to leave the MEK. Her request was faced with commanders’ anger and finally resulted in her suicide.

“Marjan stole the cyanide capsule of her commander and swallowing the capsule she committed suicide. Since then, the cyanide capsules were collected from all over the cult,” said Batul Soltani former member of the Elite council of the MEK. “The cause of her death was declared heart attack in the group at large but the truth was told to the Elite Council of the group.”

Zahra Mirbaqeri is another ex-member who witnessed the tragedy of Marjan in the MEK. “Her suicide was the consequence of the tortures in the cult-like oppressive system of the MEK under the command of Fahimeh Arvani and Faezeh Mohabatkar and under the supervision of Mozhgan Parsaiee who was the deputy of Massoud Rajavi in Camp Ashraf,” she writes.

Mohammad Karami ex-member of the group was a friend of Bashir Akbarian, Marjan’s father. He had just escaped the group and joined the American TIPF camp when he heard the news of Marjan’s death. “She had turned into a problematic member for the group because she had asked to leave the group,” Karami says. “She was under too much pressure in the meetings that the commanders hold to convince her to stay in the group. This was kind of failure for Maryam Rajavi…Therefore, they brought her to trial before the eyes of her mother. In the alleged court She was awfully humiliated by her commanders and even her mother was forced to speak against her. Faeze (Marjan) was too young to tolerate that too much pressure. She decided to commit suicide.

The MEK leaders deceitfully claimed that she died of a heart attack. She was buried by the side of Alan Mohammadi, (another child victim of the MEK). “

Referring to the words of former members of the MEK, it seems that Marjan Akbarian committed suicide more than once. She was only 29 years old when died.