She was only three years old when she lost her mother in the MEK’s operation against the Iranian border “Forough Javidan”. She was then sent to Europe in 1981 together with hundreds of other children of the MEK members. After ten years she was made to get back from Germany to Camp Ashraf, Iraq to allegedly visit her parents but actually to join the group’s so-called National Liberation Army. 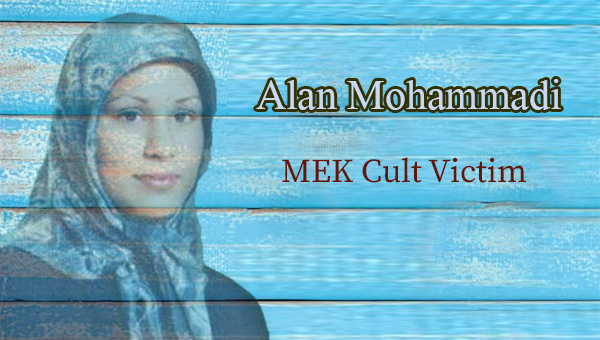 Yasser Ezati who is also a child victim of the Mujahedin Khalq has some common memories with Alan from the time they were in Europe. “Alan was kept under severe mental pressure in the MEK’s residence in Koln, Germany,” he writes. “I remember that she used to scratch her fingernails on her hand to the extent of bleeding.

As a twelve-year-old girl she used to hang out with carefree nineteen-year-olds. I witnessed that she escaped from school. She started smoking by the age of eleven….” Yasser believes that Alan’s problems were caused by emotional deficiencies. “She did everything to fill her emotional holes,” he asserts.

Several defectors confirm that Alan did not like to stay in Iraq after he visited his father in Camp Ashraf. She asked the MEK authorities to let her get back to Europe so many times but each time they held brainwashing sessions to intimidate her to stay in the camp.

“She had requested to return to Europe, but she was faced with what is usual in the MEK,” Mohammad Karami a defector of the group writes. ”Several meetings were held for her. She was the subject of all brainwashing meetings called “Current Operation”. One day, I was driving to St. 100 in Ashraf, I saw Nasrin Masih the commander of Alan’s unit with two other women. They were beating Alan. She had kept her arms over her head to protect it from the knocks and kicks.”

Mental and physical tortures that was imposed on Alan by the MEK authorities finally resulted in her mental breakdown. She was 15 years old when she committed suicide and put an end to her life. Milad Ariaiee another defector of the group writes about Alan’s death: “In 2001, a unit of female members was charged with guarding the Eastern side of Camp Ashraf. The incident took place in the first watch tower…while her superior comrade had gone to bring food Alan used the opportunity to take her own life with her Kalashnikov.”

In a very detailed article about Alan, Nasrin Ebrahimi a female defector of the MEK writes: “Alan had a very disastrous life, from vagrancy in Kurdestan to homelessness in Europe. She had gone to the MEK’s school in Europe and had been adopted by a variety of Iranian and German families. She was abused as a child labor by the MEK both in Europe and Iraq. Rajavi victimized this 15 year-old girl for his own ambitions.”