Assadollah Asadi does not attend any of the court hearings, citing his diplomatic immunity as well as the Mujahedin Khalq Organization’s plotting against Iran. On February 4, 2021, the Court of First Instance of Antwerp, Belgium, sentenced him to 20 years in prison for transferring a bomb to Nasimeh Naami and Amir Saadouni, and announced that this sentence would be final due to Mr. Asadi’s failure to appeal.

Here we review some of the documents in this case…

When the issue of the transferring the bomb by Mr. Asadi via an Austrian plane was raised, Austrian Airlines immediately denied this issue in the OsterreichHeute newspaper that it was a malicious rumor. According to the international media the TATP explosives are really sensitive to any sudden movement and traveling by a plane can definitely make this material to blow and having half a kilo of this kind of explosives on a plane is not a possible thing. For anyone who has flown anytime in the past 15 years, it is obvious that getting bombs or related equipment on a plane is virtually impossible. Items as simple as nail files are found when going through security gates and now how can someone put a half kilo bomb in a suitcase and transfer it into a country by a plane.

The article states that Austrian Airlines believes that this information about explosives is completely fabricated and is unacceptable due to its incorrect details. It added that the idea that anyone could take explosives on board was fundamentally rejected, and that rumors of explosives on board were intended to put more pressure on Austria to comply with more anti-Iranian sanctions.

The German Police even hacked into the email of Assadollah Assadi, and in the police report, they mentioned no communication were found between the Iranian diplomat with two others defendants named Nasimeh Naami and Amir Saaduni, the only emails they find was from the ministry of foreign affairs of Iran that they exchange the normal working emails, whose screenshots you can see below. 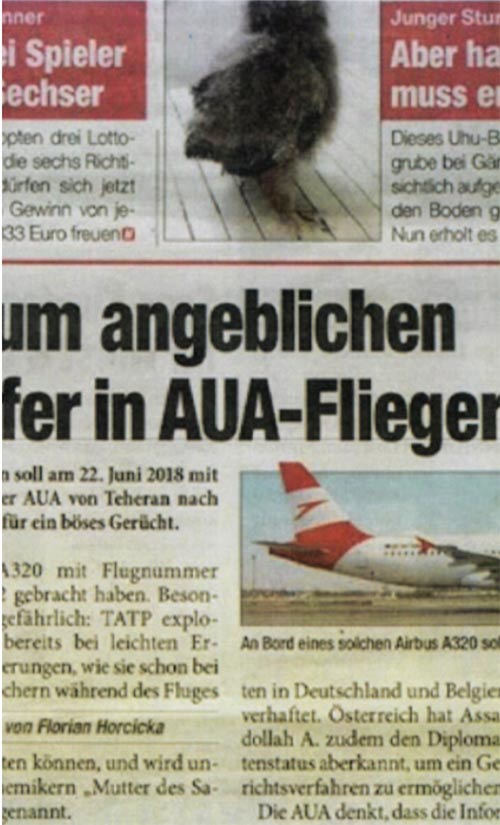 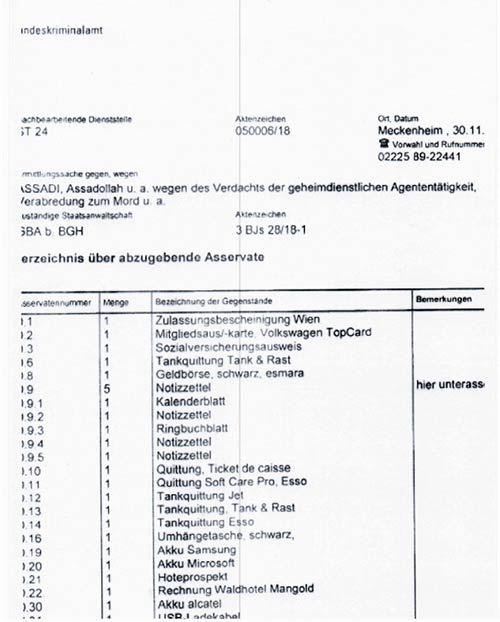 In addition, the German police report states that no bomb was found in Assadollah Asadi’s car, and that only a number of personal belongings were found. In another report, the Austrian police inspectors’ report also stated that there were no traces of explosives or illegal items in his house in Vienna. However, what complicates matters is that Amir Saadouni and Nasimeh Naami claimed that they received the bomb in Luxembourg from Mr. Asadi, but there is no footage or document to prove this claim in the case file.

Let’s look at this a little more closely for a moment; a couple met a foreign diplomat in a restaurant and received a package from him as they confessed to the police, although the restaurant is equipped with cameras and Mr. Asadi wasn’t captured in any of the camera footages. They didn’t even inquire what the package contained; they were just pleased to accept it. Was it a gift, to be opened when they returned home? Or was it a bomb that they naively and innocently were going to take somewhere to detonate? Or was there no package at all? And it is all a scenario by MEK members to frame Iranian diplomat by giving false information to the German police.

Let’s look at the evidence

Another dark side of this conspiracy is clarified in the monitored conversation between Amir Saadoni and Nasimeh Naami. In this document, it is mentioned that Amir Saadoni says to Nasimeh Naami, “our prologue was a good one that led to the apprehension of Danial (meaning Asadollah Asadi)! “

Criticizing the process of this court case, Mr. Oliver Valach (Asadi’s German lawyer) has stated, “the fundamental reason of apprehending this Iranian diplomat, and accusations put on him is merely the confessions of Amir Saadoni and Nasimeh Naami, which they have expressed like two well-spoken nightingales!”

After the arrest of Amir Saadoni and Nasimeh Naami in July 2018, the MEK’s TV channel, known as Simaye Azadi, falsely announced that the two apprehended suspects did not belong to the MEK. Furthermore, when Mahdi Abrishamchi (a leading figure in the MEK, under the alias of Bahman Tehrani) was summoned by the Belgian police as an informed person, he denied knowing and having ever met Amir Saadoni! However, not much longer, the falsehood of this denial was revealed when photos of Abrishamchi and Saadoni were disclosed in the ceremonies of Mujahedin-e Khalq.

However, this case seems to face many ambiguities and questions, and the mystery of the bomb has not yet been solved. Let the readers decide, by a glance to the evidence, anyone, even a callow child, can understand that Mr. Assadi is innocent and all this was a plot designed by MEK, the terrorist group which was in the list of terrorist organizations up until 2012. MEK is the same group that killed 12000 Iranian people and thousands of Kurds and the interesting thing is that they even assassinated 6 Americans, folks of the same country that supports them. Now even the background of this group can reveal their true terrorist faces.