– Judiciary Process Against MEK. Ebrahim Khodabandeh Explains:
Following the start of a petition by former members of the Mujahedin Khalq (MKO/ MEK/ PMOI/ Cult of Rajavi) and families of the group’s current members against the leaders of the group, then obtaining the final verdict 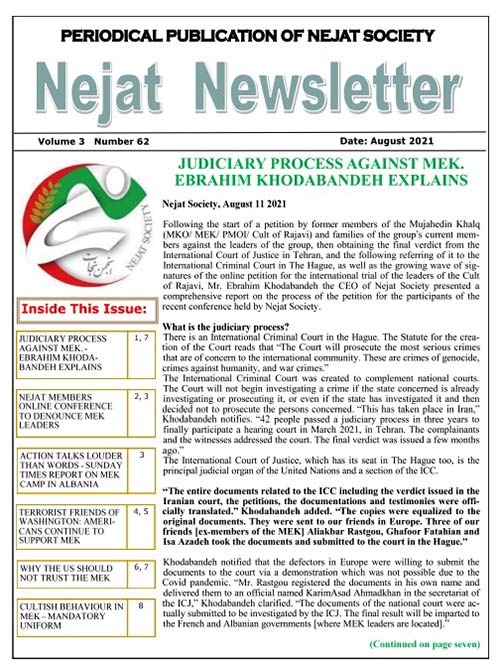 – Nejat Members Online Conference to denounce MEK leaders:
The five-day online conference started on August 7th, 2021. The conference was hosted by Ali Moradi former member of the Mujahedin Khalq Organization (the MKO/ MEK/ PMOI/ cult of Rajavi) and an expert on the cult-like group…

– Action talks louder than words:
Matthew Campbell of the Sunday Times published a video report of inside the camp of the Mujahedin Khalq (MKO/ MEK/ PMOI/ NCRI/ Cult of Rajavi), in Albania, that he calls “a heavily guarded enclave in rural Albania”. The report is titled “Inside a secretive Iranian resistance camp”. Although many other journalists have so far reported of the curious cult-like life inside MEK’s camps, Campbell’s visit seems to be pre-organized by the group to serve it as a promotional report. Campbell is welcome by the group’s spokesperson, Shahin Ghobadi and in a very rare occasion he is allowed to interview Maryam Rajavi, who is present in the camp to address the group’s annual gathering. Indeed, Maryam Rajavi never holds press conferences or TV interviews with independent media…

– Washington’s Terrorist Friends: Prominent Americans Continue to Support a Murderous Cult
One might ask if Washington’s obsession with terrorism includes supporting radical armed groups as long as they are politically useful in attacking countries that the US regards as enemies? It is widely known that the American CIA worked with Saudi Arabia to create al-Qaeda to attack the Russians in Afghanistan and the same my-enemy’s-enemy thinking appears to drive the current relationships with radical groups in Syria.

– Why the US should not trust the MEK
And that is exactly what happened in Iraq after 2003, when the majority of Shiite Islamist parties that dominated the political arena turned out to be loyal to the Iranian regime, allowing it to operate on Iraqi soil through well-funded and trained militias directed by the Islamic Revolutionary Guards Corps to launch attacks against US-led coalition troops in addition to kidnapping and assassinating Iraqis who opposed Tehran’s interference. Regarding Iran, the US is looking at an exiled opposition group, the Mujahideen-e Khalq (MEK), as the best alternative to the republic’s current rogue regime…

– Mandatory Uniform and Cultish Behavior in MeK:
o get rid of the cult’s appeal, you need to know how they work and what techniques they use. In most cases, the belief system of a religion is used as a tool for the use of techniques. In free societies, people can believe in anything they want, say whatever they think, and dress and wear whatever they want, but this is not the case in cults….